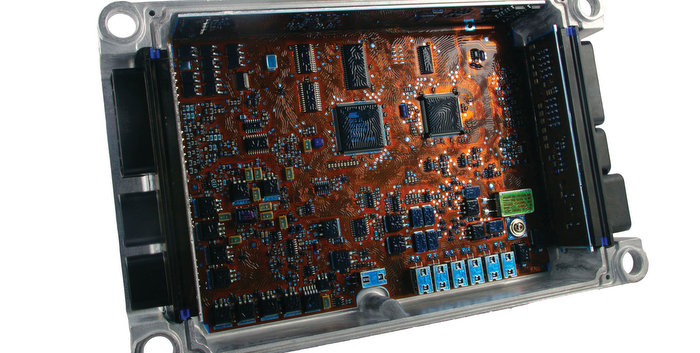 Remanufacturing has been extended to many different components on heavy-duty trucks. Fleets may be familiar with the advantages of purchasing reman components such as engines and transmissions, starters and alternators, axles, gears, pumps, and compressors. In today’s ever-evolving, technology-driven landscape, fleets now should familiarize themselves with the many advantages of reman electronic computer units (ECUs), otherwise known as electronic control modules (ECMs).

Remanufacturing to a higher quality

These units are not new to fleets or OEMs—they control electrical systems on a vehicle and include systems such as engine and powertrain control modules.

“The remanufacturing process and the ability to supply remanufactured ECUs benefits fleets and OEMs,” Ballard says. “Fleets are able to purchase a remanufactured ECU at a much lower cost than new, but with equivalent or better quality than a new ECU, which greatly reduces the total cost of ownership of the trucks overall.”

As most computer units age, they quickly become antiquated and may not be as up-to-date as the newest system on the market. This is an issue that OEMs have taken into consideration by offering a remanufactured component that can be upgraded to a higher quality than the original component. Many times, the reman part is comparable to what’s on the market at that moment in time.

“At Cummins, remanufactured ECMs are factory-remanufactured to the company’s stringent original performance specifications. If an upgrade has been made from the original design or materials, all upgrades will be incorporated into the remanufactured product,” says Sena Adekpuitor, advertising and promotions manager of Cummins new and ReCon parts.

Cummins notes that in cases where the ECM came from legacy equipment, the company handles upgrades on a case-by-case basis. Not only will upgrades be made to the products, but also the data collected from the ECU will help OEMs diagnose failures and improve the overall product.

“Remanufactured ECUs are better than the original units because the key failure modes of products returned as cores have been analyzed and improvements are made, resulting in a higher quality product,” DDR’s Ballard says.

“For example, we have seen electrical connection failures where we’ve bulked up or changed the design of sub-components to offset unexpected vehicle vibration or clearance issues that have led to excessive wear,” Ballard continues. “In addition to modifying the reman part to incorporate improvements, we’ve also had examples where these changes are fed back to the original equipment supplier for modifications to the production part.”

For fleet managers, purchasing a reman ECU may be more than just replacing a worn out or malfunctioning ECU. There can be a significant and immediate improvement in the performance of the engine, vehicle and other equipment by opting to have the part remanufactured.

For OEMs to properly analyze the component, workers at reman facilities reverse engineer the ECU. In some cases, only certain parts within the ECU will be upgraded. This not only improves the device, but leads to fewer material costs and a less costly repair.

“Through our in-depth reverse engineering process, DDR is able to identify critical hardware and software to be upgraded in order to match the most current design levels,” Ballard says. “In many instances, a legacy ECU will have components that are not as reliable, and by upgrading the software and/or hardware in these components, customers are assured the highest quality remanufactured ECU with the best performance.”

Not only do the reman parts go through intense reverse engineering processes, but they’re also tested to make sure they meet specifications. According to Mack Trucks, each V-MAC, Mack’s ECM, is completely tested at room temperature and then heat-soaked and retested at simulated operating temperature to ensure that all system features meet OE parameters.

Mack offers its own remanufactured ECMs under its REMACK program. According to the company, trained technicians work closely with Mack engineers and vendors to ensure that all of Mack’s REMACK parts meet the strictest tolerances.

The quality of these parts is rarely an issue, with many OEMs viewing these products as good as purchasing new components.

“Genuine Cummins remanufactured ECMs are remanufactured in the same factory environment as new Cummins parts and are built to the same high-quality standards and specifications,” Adekpuitor adds.

In most cases, fleets should consider the age of the vehicle when deciding between new parts and reman parts. The older the vehicle, the more likely a fleet manager is to opt for a reman ECU. Additionally, fleets may choose reman parts in cases where they may not have enough capital to purchase a brand new component.

“Sometimes the age of the vehicle or business conditions requires a better return on investment, without sacrificing performance or reliability. That’s why we offer Genuine Cummins remanufactured parts,” Adekputior says.

“The expectation of life for a reman component is the same as a new component. DDR matches the warranty of a new component to reflect this assurance. For some components, the life expectancy could be longer because many infant mortality cores have been scrapped and early failure modes eliminated,” Ballard says.

Once the decision to purchase a reman ECUs is made, DDR insists on trusting OEMs to do the remanufacturing in order to ensure the best quality product. “Given how important uptime is for fleets, high quality genuine components keep trucks on the road as much as possible,” DDR’s Ballard says. “A genuine remanufactured ECU ensures they are getting an ECU backed by ‘the factory.’”

Non-genuine ECUs, Ballard notes, run the risk of incorrect programming that could lead to less than optimal vehicle performance, fuel economy and emissions.

In order to begin the process of purchasing a reman part, fleets should work with their trusted repair facility or dealership.

“When it’s time to purchase a remanufactured ECU,” Ballard says, “the fleet should return the existing ECU directly to the dealer.”

Cummins-authorized repair facilities offer the same services, and will visually inspect the part on-site before sending it to be remanufactured.

“Fleets can return their core ECM to any Cummins-authorized repair facility worldwide,” Adekputior says. “All that’s required is a simple visual inspection and the value of the core will be easily determined, allowing fleets to know up-front what the next cost of the repair will be.”

The warranty program that is offered for the original part will determine the costs associated with the repair. Cummins’ warranty pays for the replacement ECM and labor. According to Ballard, the warranty process for Detroit remanufactured ECU’s is the same as for other Detroit Genuine Parts: One-year/unlimited mileage.

Mack boasts a strong warranty as well, covering 100% of the parts and contingent damage, as well as 100% of the labor if the part is installed by an authorized Mack dealer, according to the company.
After the repair, some OEMs will warranty the reman part.

“A Genuine Cummins remanufactured ECM also carries the same full factory warranty as a new ECM,” Adekputior says. An additional and sometimes overlooked benefit of reman components, especially in cases of ECUs, is that fleet managers can rely on support in the event that an older truck has parts that are no longer in production but still need to be serviced.

“Fleets are usually able to purchase remanufactured ECU’s after an OEM stops producing or selling new ECUs,” Ballard says. “This enables fleets to service older trucks with the highest quality service components for a longer period of time.”

For fleets looking to reduce their environmental footprint, remanufacturing offers many opportunities to positively effect change. Reman extends the life of ECUs that would otherwise be tossed into landfills. OEMs and fleets reduce the environmental impact of their operations.

“Remanufacturing has a positive impact on the environment because it reduces not only the number of parts sent to waste landfills, but also the raw material and energy required to produce new parts,” DDR’s Ballard says.

“Instead of sending tons of metal to landfills and the scrap heap, we’re recycling and reusing resources, significantly reducing the need to mine new raw materials. This conserves natural resources and minimizes greenhouse gas emissions,” Cummins’ Adekpuitor says.

In an industry increasingly concerned with meeting environmental demands, whether because of regulations or costs, fleets can pride themselves in knowing that choosing a reman ECU contributes not only to the business’s bottom line, but also contributes to its image as a green fleet.