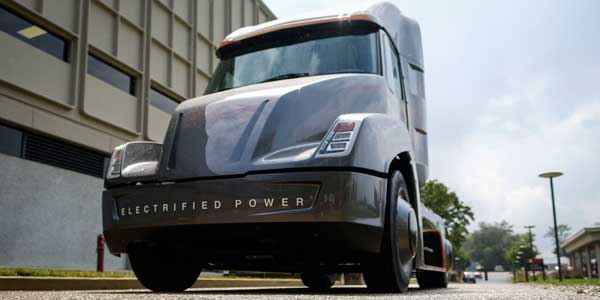 There’s a moment when you’re standing under a gray curtain of clouds and wonder if you actually felt the first rain drop or just imagined it. That was the moment when the crowd gathered in the courtyard of the Cummins Technical Center, the power generation company’s incubator for innovation. Julie Furber, executive director of Cummins’ electrification business, stood at a podium in front of a uniquely shaped truck draped in a dark veil, undeterred by the swelling sky. After all, this was the moment that she had been looking forward to since Cummins launched its electrification business group; the moment the industry had been talking about in what-ifs and whispers—the unveiling of the industry’s first fully electric Class 7 “urban hauler” tractor.

Dubbed the Aeos (a reference to one of the four-winged horses that carried Greek mythology’s sun god across the sky), the truck includes a battery pack offering with a charge time of one hour for a full charge and a range of 100 miles. That range can be extended to 300 miles with additional battery expansion. To go even further, an engine-generator option allowing the installation of a Cummins B4.5 or B6.7 engine boosts the range to 600 miles and offers a 50% fuel savings compared to today’s diesel hybrids with zero emissions, Cummins said. The truck weighs in at max 75,000 lbs. GVWR, with the tractor at 18,000 lbs. It also sports a 44,000-lb. max payload. In terms of efficiency, the truck touts an approximate 30 MPG diesel equivalent.

“We wanted to demonstrate the capability of the powertrain systems that we can deliver,” Furber explained as she stood next to the truck in the rain for more than an hour answering questions and smiling for pictures. “The reason the electrification team is starting in transit bus is because transit bus is ready now. With the electric truck powertrain, it’s not that we can’t do it; it’s more that the time is not quite right yet. For some of the urban applications, the climate is getting there, but for the linehaul applications, battery size, battery cost and stuff doesn’t make it quite ready.”

Now that electrification lightning has struck the tractor market, Furber said that this is only the beginning. Though the Cummins Aeos will be pulling duty as a marketing vehicle, it’s also a fully capable research truck heading into vocational applications such as urban delivery operations, port drayage and terminal container handling.

“We’re going to put it to work in some of our customers’ applications,” Furber confirmed. “It’s a research truck. Our power electronics and control technicians are going to be integrating some of our newly developed components and testing those in the truck. We’re also going to have a lot of fun taking it around and showing it off.” 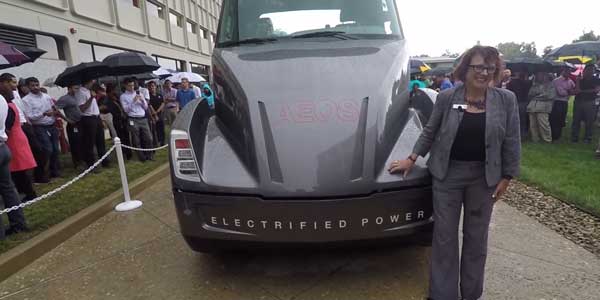 A media coordinator opens an umbrella above Julie while handing her a compact mirror and briefing her about her next on-camera interview. Julie makes a joke about the rain wreaking havoc on her hair, but she doesn’t seem to care, not really. She knows there are many more questions to answer, and now that she doesn’t have to dance around the fact that Cummins has an electrified powertrain solution, she’s ready to answer those questions in the hours, months and years to come.

While the weather wasn’t ideal for a big PR event, it was a fitting metaphor: despite the challenges and detractors who say it can’t be done, nothing was going to stop Cummins from pushing innovation forward.