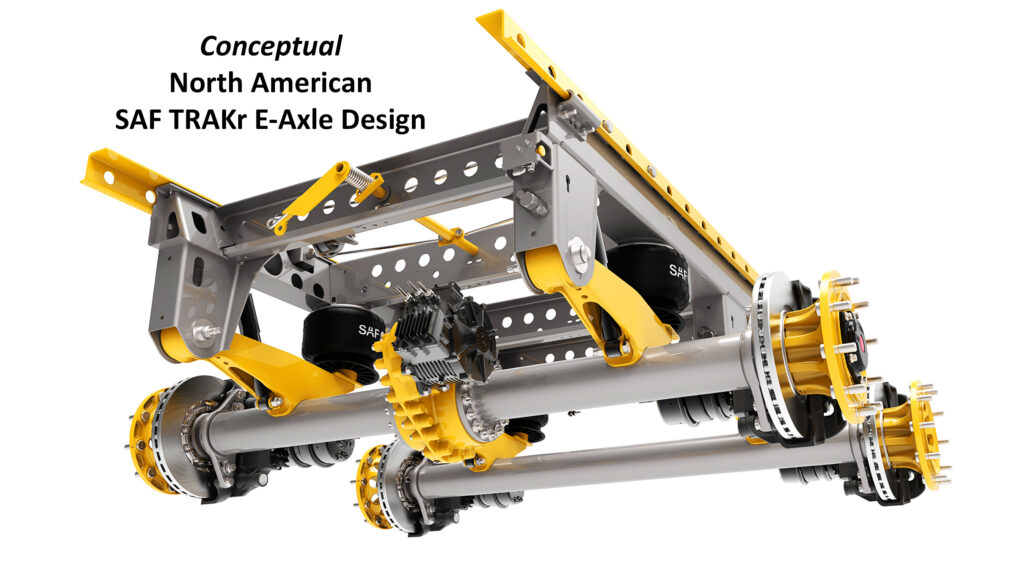 SAF-Holland has begun the market and product development phase of its trailer electric axles on real-world transportation applications for North America. The SAF TRAKr (or recuperative axle) is currently undergoing intensive testing around the world–with positive initial user experiences, the company noted during a press conference held during TMC 2022.

First presented at the 2018 IAA Commercial Vehicles show in Hanover, Germany, electric axles from SAF-Holland have since gone through further development steps. The SAF TRAKr uses a high-voltage generator module for electric power regeneration to lower the emissions and fuel consumption of the overall vehicle. SAF-Holland e-axles have been undergoing rigorous testing in real-world operation in Europe and South Africa.

The ideal application for the TRAKr e-axle is refrigerated transport fleets in which their trailer refrigeration units (TRU) can run fully electric. Purely electric operation reduces noise and will help fleets meet the new proposed Zero Emissions standards, SAF-Holland noted. In addition, this allows the trailer’s TRU to operate when uncoupled without the use of diesel fuel, which is highly beneficial for night-time inner-city deliveries. Electrical operation also extends the service life of the individual TRU components.

The modular construction strategy of SAF-Holland e-axles relies on cooperation with multiple partners. The components are configured for ideal integration, resulting in a modular system for maximized system efficiency. The modular trailer e-axle system allows for easy installation by trailer manufacturers and uses standard assembly line
procedures, the manufacturer noted. The TRAKr e-axle will be available in the future on both SAF mechanical and air suspension tandem axle slider systems for reefer trailer applications.

Maintenance is also simple and cost efficient as the electrical generator drive unit does not have to be removed when servicing the wheel ends. Wheel-end components, with the exclusion of the proprietary hub assemblies, remains unchanged. Wear parts such as brake pads, calipers and brake disc rotors are standard SAF-Holland components to ensure and simplify spare parts supply and servicing.

Bill Hicks, trailer suspension and axle product manager for SAF-Holland, provided an overview of the axle:

He later noted that the battery pack associated with the TRAKr e-axle would call for a smaller battery pack compared to a stand-alone battery pack on a trailer that would take energy from an electric tractor.

SAF-Holland aims to have prototype units in the field by the end of this year, beginning of next. Compared to traditional suspension, the TRAXr e-axle potentially adds 200 to 300 lbs, and when asked about the availability of automatic tire inflation system on the suspension, SAF-Holland is continuing to work on the possibilities as it brings the e-axle to North America.