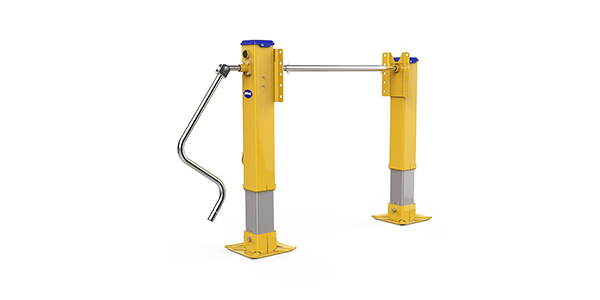 The Saturn 62 iM also comes standard with a removable cushion foot. A rubber cushion under the lower leg protects the landing leg and internal mechanisms from impact shock from repetitive container loading. In addition, the Saturn 62 iM has a completely internal gear train, which is forged and precision machined for smooth cranking, to meet the demanding needs of intermodal operations. Internal gearing helps to protect the landing gear when stacking or transporting multiple chassis trailers together. And, when the chassis trailer is stored or transported upside-down, the landing gear won’t leak because it is equipped with double-lipped shaft seals, designed to keep contaminants out and grease in, according to the company. The cast steel cap includes a premium gasket seal instead of vulnerable silicone sealant.

When the legs are fully extended and under excessive side load forces, the FloatingNut moves freely with the elevating screw to prevent damage from occurring, and the twin-bulkhead design feature increases structural resistance to the side-load forces. When excessive side-load forces occur, the FloatingNut helps protect the elevating screw to maintain smooth cranking performance, according to SAF-Holland.

Advertisement
In this article:SAF-Holland, Trailers & Bodies