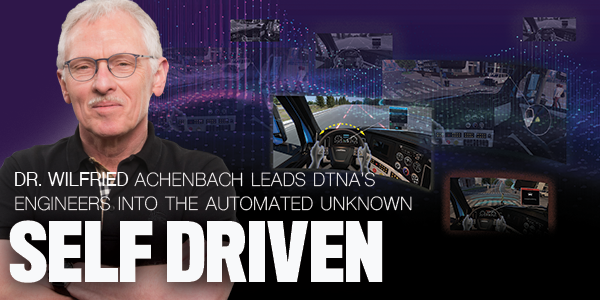 Dr. Wilfried Achenbach has a unique perspective on developing advanced safety systems. But it’s not the one you might expect from Daimler Trucks North America’s senior vice president of engineering and technology.

Dr. Wilfried Achenbach has a unique perspective on developing advanced safety systems. But it’s not the one you might expect from Daimler Trucks North America’s senior vice president of engineering and technology.

“When you’re on the highway as a cyclist and a big truck blows by you, you feel the power shake through you, that’s when you really think about safety,” he says. When he’s not behind the wheel of an in-development Freightliner, Wilfried is behind the handlebars, sharing the road with everything from two-wheeled bikes to eighteen-wheeled tractor-trailers. “You wonder: ‘Did that truck driver see me or was he distracted?’ So, for me, the personal side is extremely important in the development of advanced safety systems.”

Wilfried has been tasked by Martin Daum, member of the board of management with responsibility for the Daimler Trucks and Daimler Buses, with pioneering fully automated Level 4 truck technology and delivering it to the market within 10 years.

This is no small task.

“If you would have asked me how we would develop Level 4 technology maybe three or five years ago, I would have told you that it’s an evolution of current advanced driver assistance systems,” Wilfried explains. “But Level 2 advanced driver assistance systems are there to increase road safety by relieving the driver from monotonous tasks and to give him or her early safety alerts concerning something unusual in front of the truck. Level 4 automated driving systems have requirements way beyond advanced driver systems.”

Wilfried’s global team of engineers are master truck builders, manufacturing reliability at scale and integrating intricate systems, but even he knows that the complexities of Level 4 automated driving systems demand a partner.

While self-driving technology is relatively new to trucking industry headlines, Torc’s team of more than 100 people has been integrating self-driving solutions on vehicles ranging from SUVs to 300-ton mining trucks since 2005.

“Torc has been operating automated vehicles on public roads for 12 years, and we are very pleased that we are accident-free,” Michael, Torc’s co-founder, says. “We believe that the reason that we’ve been accident-free is that safety has come first at Torc.”

DTNA announced its plans to acquire a majority stake in Torc Robotics in late March, and now Wilfried and Michael will work on Level 4 automated truck technology, which first hinges on the system’s ability to perceive—requiring it to detect objects, classify them and predict what they’re likely to do.

So how are they going to do that?

Safety as a goal tends to get lost in the Level 4 automated truck driving system conversation as the questions quickly turn to, “What happens in this situation?” or “What does that mean for the driver’s career?”

Yet, safety is the bottom line for Wilfried and Michael, with the hope that wide-spread Level 4 automated driving technology adoption would usher in a new era of “accident-free driving.”

“In 2017 in the U.S., 37,133 people died in motor vehicle crashes,” Wilfried said, citing data from the National Highway Traffic Safety Administration. “That is a number our society currently accepts, but what is the level of acceptance for automated driving systems? It has to be much lower, that’s very clear.”

Michael echoes that sentiment and then raises the safety stakes.

“What is safe? How about nine times out of 10?” he asked rhetorically concerning the acceptable safety record for automated driving systems, before answering: “That’s nowhere close to being acceptable in our opinion. Ninety percent? We want to start at 99% and then we ask, ‘How many more nines can we get behind the decimal point?’”

To make self-driving trucks a reality, a symphony of complex sensors and components need to feed information to sophisticated software architecture with artificial intelligence layers, which then interpret the data through a neural network—a highly complex, but very cool machine learning framework that would allow a self-driving truck to understand what’s happening around it and predict outcomes.

“A big challenge will be to develop all of the components,” Wilfried explains. “People forget about the hardware; you still need adequate sensors for those systems.”

“Right; what if there’s a rainstorm or a snowstorm?” Michael adds, highlighting the need for the truck to be able to detect objects regardless of the environment. “For a Level 4 system, you need redundancy in a lot of different areas. We’ve been a big believer in a multi-modal approach using cameras, LiDAR and radar for more than 12 years. In different environments, you’re able to offset a deficiency of one sensor with a unique capability of another sensor.”

“Take our Level 2 Detroit Assurance 5.0 system, for example,” Wilfried says. “Our new system uses camera-based information to detect objects, and we also use the radar input to independently detect objects. And then that data is compared. So if the camera sees something, the radar confirms it because every sensor has different advantages. Radar, for instance, precisely measures the differential speed of the vehicle in front of you. The camera is very good at detecting what lane that vehicle in front of you is in.”

“And camera systems, radar systems and LiDAR systems,” Michael says, “are all going through major changes right now. I think the cost will go down and the range, the resolution and the robustness of all the sensors will improve. In our opinion, the three different sensors that you see today are going to be very different than when we deploy Level 4 in 10 years.”

As the hardware capabilities continue to progress, so too does the software engineering the systems require. Machine-learning sound far-fetched, but, theoretically, neural networks—the brains of A.I.—have been around since 1943, when neurophysiologist Warren McCulloch and logician Walter Pitts created the first computational model for neural networks. What has held engineers back was the fact that there wasn’t enough computing power to put the computational models to work.

Guess what? Technology has finally caught up to enable the theory. Your cellphone is more powerful than all of NASA’s 1969 computing power combined.

So they have the power. Now the question is: What do they do with it?

Science fiction can be a precursor to science fact. Before something exists, you have to dream it up. Author Isaac Asimov created what he called Psychohistory, which combined history, psychology and mathematical statistics to accurately predict the behavior of large populations of people. It’s no coincidence that Torc’s automotive self-driving platform in testing is called Asimov.

Level 4 automated trucks need to be able to anticipate and predict traffic situations in the same way that you do when you’re cruising down the highway and see that black SUV barreling toward you in the rear-view mirror. You know that you don’t have time to move into the right lane because the SUV will pass you on the right and then likely cut you off the first chance he gets. You’ve seen it a million times. Automated Level 4 trucks using neural networks need to learn the same thing and then recognize it.

“In that scenario, there’s one car,” Michael said, “and we can manage that and handle that really well. The challenge is what happens when you have four cars changing lanes in front of each other.

“Now let’s say there are two cars in front of you and one car is swerving a little bit in its lane, even crossing the dash lines in front of your vehicle. What do you do in that situation? Now, one would say, ‘Maybe I want to slow down a little bit,’ but what if you have another car behind you that is tailgating you? The last thing you want to do is apply your brakes and potentially cause a rear end collision.

“If you think about it,” Michael says, “you could add another car and another car and another car, and it’s these clusters of bad actors, if you will, that’s where things become problematic because bad actors are unpredictable. If you have safe drivers, they’re much more predictable, and if you can predict what’s going to happen in let’s say, a hundred milliseconds, a second, five seconds, then you can determine the more appropriate action to take. But this is the catch, and we’ve had the debate internally: Can you predict human behavior if humans are unpredictable?”

“We do accident analysis and look at the most probable scenarios to determine what has caused an accident,” Wilfried says. “We look at speed, lane departures, rear-end collisions. Within those studies, we’re looking at areas of the highway and road traffic where you see higher collision rates.

“We try to tackle those problems,” he continues. “This is an advanced engineering process that works with a few trucks; it’s very experimental and the timeframe for a proof-of-concept is difficult to say.”

But a Level 4 automated system can’t just work in a few trucks—it has to work with every Freightliner Cascadia that Daimler Trucks North America manufactures.

“To do it where you show the proof of concept is very different than doing it in 100,000 times per year in a reliable way and a safe way,” Wilfried says.

While the challenge is daunting, the Level 2 automated driver system offered with Detroit Assurance 5.0 gives Wilfried the confidence that Detroit and Torc will succeed.

“The side radar on our Detroit Assurance 5.0 package is a great development,” he says. “The radar on the passenger side gives the driver information about what’s in his blind spot, which is an area where he obviously does not have good visibility.

“Personally, when I started in advanced development,” Wilfried recalls leading the development of the first radar-based adaptive cruise control system on a car in the late ‘90s, “in the beginning there were not a whole lot of people who believed in it. And now, seeing it in production and seeing what it can do, that’s just…” He pauses for a moment, reflecting on the achievement, “I would say, it’s beyond nice. I can say the team is very proud of what we accomplished.”

It’s the pride in the development of and the belief in the safety improving the ability of automated systems that will continue to drive Wilfried to explore the uncharted regions of engineering.

For more on this topic, check out What’s a neural network and Failing safe in the automated unknown.