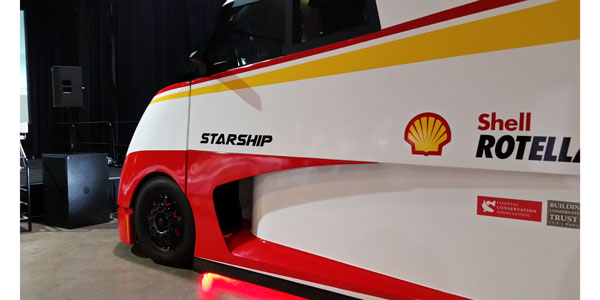 Shell Lubricants has announced the results of its Starship truck‘s cross-country run, which began in San Diego, Calif. and ended in Jacksonville, Fla.

According to numbers from Shell that were independently verified by the North American Council for Freight Efficiency (NACFE), which followed the truck on its run, the truck achieved an average of 8.94 MPG (the national average for Class 8 trucks is 6.4) and a freight ton efficiency of 178, which is 248% better than the national average of 72. Freight ton efficiency measures how much energy was used delivering a particular set of goods from place to place, combining the weight of the cargo with the energy used to transport it. According to Shell, optimizing freight ton efficiency was the main goal when building the truck. The Starship was fully loaded on its run, hauling 39,900 lbs. of reef material from California to Florida for a total GVW of 73,000 lbs.

And, in terms of calculating estimated CO2, if all two million trucks in the U.S. reached the overall fuel economy and freight ton efficiency performance of Starship, they would emit an estimated 229 million fewer tons of CO2 into the atmosphere per year, which would lead to a 60% drop in emissions from the trucking segment, Shell noted.

“We’re extremely proud to have been part of Starship; it was a great collaborative effort,” said Carlos Maurer, president of Shell Lubricants Americas. “And these results are just the baseline. I think we’ll get even better as time goes by.”

The Starship truck was developed by Shell and Airflow Truck Co., and Airflow owner Bob Sliwa was the man behind the wheel for its weeklong run. 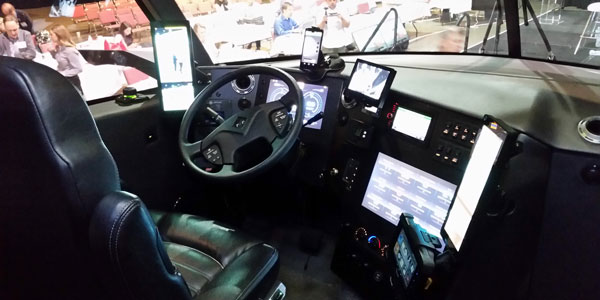 One of the most important distinctions of the truck is its unique design, which was made for maximum aerodynamic performance. For instance, the mirrors have been entirely replaced by cameras, which was done for the aerodynamic improvements this offers plus other benefits including improved visibility at night and during weather conditions such as rain. The Starship runs on a 2017 Cummins X15 engine and an Eaton 18-speed automated manual transmission, and there are plans to add a Hyliion electric axle in the future.

Watch our video on the Starship truck here.