The forward-thinking approach of Cowan Systems 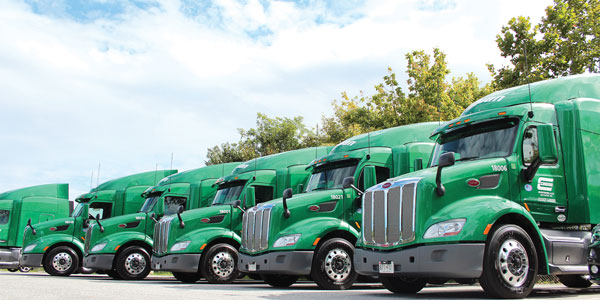 In the 47 years that Michael Sizemore has worked in truck fleets, he’s seen what he calls some very intelligent decisions. “In 1994, when Joseph Cowan, the son of the company’s founder W.T. Cowan, opened Cowan Systems LLC as a new operating entity, he created a niche with a lightweight fleet,” says the director of maintenance at Cowan Systems. “Expanding the company focus to include the services of a specialized truckload carrier turned out to be a forward thinking management strategy.”

The result, Sizemore notes, is a fleet that numbers about 1,500 tractors, up from 400 power units 10 years ago. In the operation are International ProStar and LT 625 models as well as new Peterbilt Model 579s, along with a sizable number of 53-ft. Wabash National dry vans.

“We have tractors with different nameplates, but with few exceptions where technology is proprietary with one manufacturer, our specs are almost identical across the board,” Sizemore relates. “We have found that we have fewer problems with standardized specs.

“Until 2007, Cowan Systems operated one make of tractor exclusively,” Sizemore continues. “Then we started having some problems, and after four years without a resolution we realized that equipment issues tend to run in cycles so we made the decision to not have tractors from just one OEM. That also makes the manufacturers stay competitive and its gives us more options for service providers.”

One decision Cowan Systems made recently was to spec the new PACCAR 12-speed automated transmission in its Peterbilt Model 579 tractors. The gearboxes are paired with PACCAR MX-13 engines. By end of the year, the fleet will have 150 Peterbilts with the PACCAR powertrain, and it has a few hundred more on order for delivery in 2019.

“The PACCAR automated manual transmission is well matched with the MX engine and that helps improve fuel economy,” Sizemore says. “The latest generation PACCAR MX engines are also far more fuel efficient. The more sophisticated the engine, the better the fuel economy—and the MX-13 is in a different league. Every OEM has an optimal engine-transmission combination, and for us, the PACCAR solution tends to perform better.”

As a firm believer in AMTs, Cowan Systems has equipped every tractor in its fleet with the transmission technology. Included have been several generations of Eaton UltraShift Plus models, as well as the new PACCAR units.

“We don’t make any specification decisions without knowing the return on investment,” Sizemore says. “Automated manuals are premium priced components, but they pay for themselves in several ways. For example, there’s certainly a fuel savings. Our fleet runs about 11 million miles per month, and compared to earlier units with manual transmissions, tractors with automated manuals are getting about a half an MPG better performance.”

Sizemore attributes that improvement to the more efficient, intuitive shifting in automated manual transmissions based on grade, weight, engine torque and throttle position, and other features, including coasting on slight downhill grades with the driveline disengaged. In addition, he notes that because automated manuals more effectively choose a starting gear, they tend not to cause costly driveshaft or axle problems.

“Our drivers’ willingness to operate equipment is always a factor in our decisions as well, and when it come to automated manual transmissions, we asked them to test units early on in the process to determine their level of acceptance,” Sizemore relates. “The results were overwhelmingly positive, and now we’re finding that automated manuals are also helping expand our driver pool.

“Additionally, while hard to quantify, it’s common sense that safety is better when a driver doesn’t have to shift a truck, and the transmissions help reduce fatigue,” he continues.

Sizemore also points to driver creature comforts as an example of how driver comfort and safety are a constant focal point at Cowan Systems.

“Recently, we increased the size of our sleepers and upgraded tractor interiors,” he explains. “We don’t have a driver recruiting issue, but like every other carrier, we need to focus on retention. If we can keep drivers for six months, we’re usually successful in keeping them longer.

“We also work with drivers regularly to provide reminders of weather and other safety factors. Last year, for example, we’ve installed the Bendix Wingman braking, stability and adaptive cruise control, and collision mitigation technology on our tractors,” Sizemore adds. “We also have some units with SmartDrive camera systems to be able to review safety-related events.” 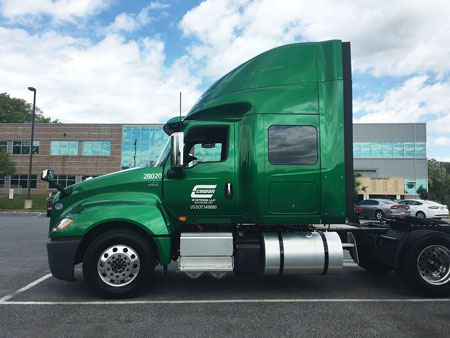 While adhering as closely as possible to a 42-month trade cycle for tractors, regardless of mileage, Cowan Systems is firmly focused on vehicle maintenance. “We only operate two company shops with seven technicians for about 6,000 units,” Sizemore explains. “Most of our work is done through vendor partnerships, including dealers, leasing companies, national chains and independent service providers. We’ve found those partnerships to be more economical and have faster turnaround times because they are located across our network near terminal locations. Our maintenance vendors are essential to our success.”

Cowan Systems also began using TMT Fleet Maintenance software from TMW Systems a little more than two years ago. “We’re integrating the software with our enterprise management systems, and as we become more familiar with it the data it provides is getting more valuable,” Sizemore says.

“We were also a pilot user of Navistar’s OnCommand Connection all-makes diagnostic system, which we use to monitor a growing numbers of the vehicles in our fleet in real time, including fault codes and custom alerts. The system also allows us to locate trucks quickly using interactive mapping and to develop action plans to get trucks fixed and back on the road if a breakdown occurs.”

Headquartered in Baltimore, Md., Cowan Systems traces its roots to 1924 when William T. Cowan established W.T. Cowan Inc. with a single truck that he owned and operated to haul ice cream from Baltimore to a commissary in Washington D.C. Cowan soon expanded his business to provide LTL service throughout the Mid-Atlantic states.

Today, Cowan Systems, in addition to serving shippers as a lightweight truckload carrier, also offers dedicated fleet services, including specialized equipment, strict timetables and custom reporting. A Cowan dedicated contract can be based on a specific volume of business or on a set number of drivers, tractors and trailers on a cost-plus basis.

Also part of the operation is Cowan Logistics, which provides van, flatbed, refrigerated, LTL, heavy haul, bulk and hazardous materials services with company owned trucks and a pool of more than 15,000 contract carriers.

“All of our service offerings are designed to reduce our customers’ shipping costs,” Sizemore says. “Along with the right mix of carrying capacity, we can guarantee a high level of service because we have the right equipment on the road.”