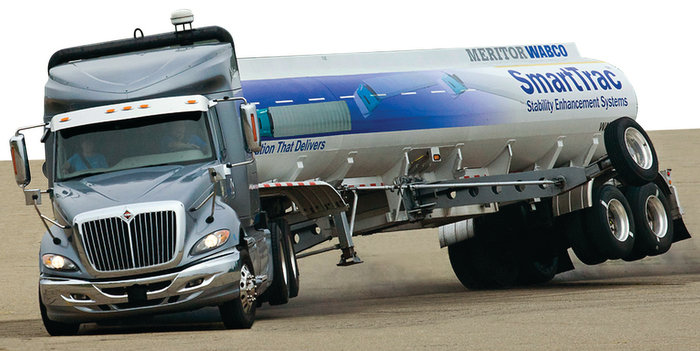 It happens in a split second. The blink of an eye. Whether it’s a momentary lapse in judgment or the allure of a distraction, a truck hits the off-ramp at an unsafe speed—one that could certainly cause a catastrophic rollover incident that impacts your personnel and equipment with devastating consequences. But in that moment, the stability control sensors are already at work—sending pulses of PSI to the brakes, putting the control back into the hands of the driver, who can safely exit the ramp without incident.

It’s this type of crisis aversion situation that’s driving the adoption of stability control systems. The aim of these systems is to prevent rollovers —specifically when an unsafe speed and improper steering maneuver combines to put the truck in a rollover situation. And it’s working, according to Mark Melletat, director of field operations for Meritor WABCO Vehicle Control Systems. “We’re seeing significant performance. Industry reports and feedback confirm. I’m getting stats from 60 to 70% in rollover prevention,” he reports. “We see growth for the product year over year. In the trucking world, there’s a common sharing of knowledge and information among fleets. This is a technology that’s proven effective and fleets communicate that. Almost all the major carriers today utilize the technology.”

In general, stability control systems consist of a number of components. These include a series of sensors that monitor the vehicle’s direction, speed, motion and driver input, explains TJ Thomas, director of marketing and customer solutions, Controls group, Bendix Commercial Vehicle Systems LLC. An electronic control unit (ECU) collects and interprets the sensor input. And control valves and modulators provide intervention such as throttle reduction or brake application, when necessary.

In the stability control realm, electronic stability control (ESC) typically combines roll stability control (RSC) with the added capability of yaw or rotational control. The system applies selective braking during directional instability. If the truck is on a slippery surface and it goes into a directional maneuver where it loses stability, the system will take inputs from the steer angle sensor and the yaw rate sensor to identify the driver’s intended path compared to the actual path of the vehicle and selectively apply the appropriate brakes. For example, it might apply brakes to the right front, left rear to influence direction and stabilize and unstable vehicle.

“The duration and sequence of those brake pulses depends largely on the wheelbase of that vehicle, and the specifics with the steering geometry,” Melletat explains. “Shorter wheelbases would operate differently than a long wheelbase.

Taking advantage of today’s advanced hardware and software, Meritor WABCO’s stability control system actually learns as it rolls down the road. It will continue to make adjustments through the life of the product. As things change on the vehicle—common vehicle wear and the front-end alignment changes, for example—the system will make adjustments to optimize performance. The initialization of that is within 100 miles, according to Melletat.

“It’s strictly looking at the input from the sensors, measuring critical thresholds and making adjustments based on those. It does not depend on driver behavior,” he explains. “The system also makes adjustments for load and mass for certain dynamics of the vehicle.”

The benefit of measuring mass is to understand where the truck’s roll threshold may occur. Obviously, when the truck is not loaded, the trigger threshold is different than when the truck is loaded and it has a higher center of gravity. The system makes adjustments in the controls based on that information.

“More than 40 heavy-truck rollovers occur every day in the U.S., and nearly two-thirds involve tractor-trailer combinations,” Thomas says. “Fleets can benefit from the most comprehensive stability offering when the Bendix TABS-6 advanced roll stability system installed on the trailer is used in concert with a Bendix ESP full stability system installed on the tractor. This combination is particularly attractive for fleets that run high-value trailers.”

In a rollover situation, the Meritor WABCO system pulses the trailer brakes. Melletat explains that it’s important not to assume that the trailer has ABS brakes. The modulation of the brakes is safest way to provide more control to the driver, as opposed to send 110 PSI to the trailer brakes. If a trailer does have ABS brakes, the deceleration improvements if the system was able to detect the presence of an ABS system are marginal, according to Melletat.

Being an extension of ABS, ESC and RCS does not require any additional preventative maintenance. If there is a maintenance issue that needs to be addressed, the system will activate an indicator light on the dash. Both the Meritor WABCO and Bendix system are also self-diagnosing. When the truck is turned on it runs through a series of tests, exercises valves and checks inputs. If there’s an issue, the light is illuminated. On the most basic level, it’s important to be aware of the indicator light. At the very least, do a bulb check to ensure the light is working.

Putting the brakes on 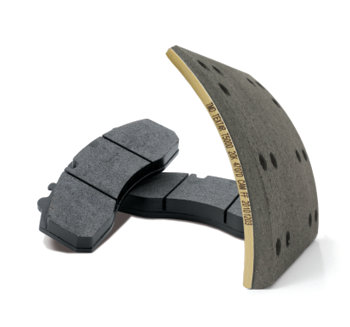 The focus, in terms of stability control function, is consistency. Jurchaks stresses the importance of having a reliable braking friction material. A lower quality friction can have an impact on everything else, including stability control and ABS.

“It’s okay to change the friction as long as you change it to one that understands the OE requirements,” Jurchaks states. “On the aftermarket, that’s where you have to pay attention, especially on reduced-stopping distance trucks produced after 2011. Those tractors will come with high performance brakes. It’s important to use only RSD released/approved braking friction material. By using lower quality, the brakes may still work, but they will not perform like the higher performance RSD material.”

Likewise, it’s important to spec the proper braking material for trailers. There’s no one-size-fits-all for trailer brake friction material, according to Jurchaks. He explains, “Different trailers have different friction needs. A logging trailer, a car hauler, should use premium or even severe-duty friction materials, as opposed to typical on-highway material. You need to observe the axle load and the terrain.”