‘What role are suppliers playing in electric truck development?’ Meritor answers that and more 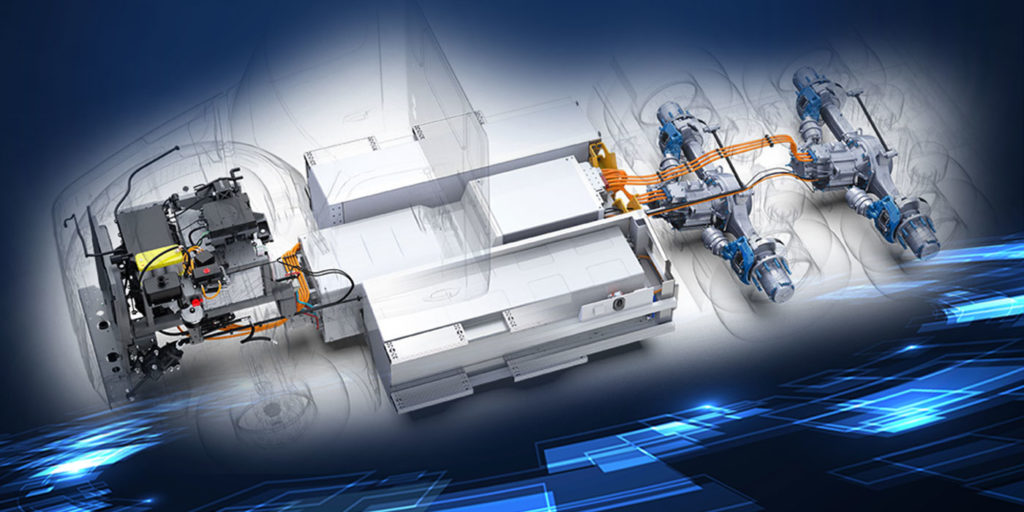 The more questions about trucking electrification that are answered, the more crop up. Electric truck orders opened, first-adopting fleets started the electric truck spec’ing process, and you may have started to wonder: What’s the supplier’s role in all of this? Surely suppliers are delivering electric drivetrain components to OEMs and you want to be able to leverage those hard-earned supplier relationships that you’ve cultivated over years. So how do you do that when spec’ing a truck with an electric powertrain?

“We just want to remain flexible,” T.J. Reed, Meritor’s vice president global electrification, said during the Meritor announcement of its fully integrated, commercial electric powertrain for medium- and heavy-duty commercial vehicles. You have likely heard of Meritor’s Blue Horizon electrification program and the 14Xe electric system, but the integrated powertrain package takes it one step further, coupling with a powertrain control module that complies with ISO-26262 ASIL-C rating, the international standard for functional safety in the automotive industry that applies to electrical and electronic systems consisting of hardware and software components in vehicles.

“We are a launch partner with PACCAR, supplying the complete kit and the drive system,” Reed continued. “We certainly feel that there is part of that powertrain content that makes more sense for major OEMs, but we have a long way to go as an industry to optimize cost, hence our menu-based approach. We think there is a value for smaller OEMs to take a full turnkey integrated powertrain. Others might be interested in one or two of the major systems. Maybe just the drive system because they have a battery supply strategy with other partners. At the end of the day, the Meritor approach is a modular design we can add and detract to fit OEM needs while we are gaining capability.”

During the hour-long media call, Reed tackled a range of questions, from developing technology that’s ready for the market to Meritor’s involvement in NACFE’s upcoming Run on Less Electric. Here’s what Reed had to say.

With electric truck powertrain technology development moving so quickly, how is the 14Xe powertrain ready to scale while providing a foundational electric powertrain solution?

Reed: This is the beachhead start. There is going to be an evolution. From a design cycle perspective, if you look at a traditional Meritor axle, it has a seven- to 10-year life cycle. Then vehicle life cycles tend to be shorter than that, and that’s an industry-wide phenomenon, which is great because that is what is going to drive innovation, higher performance, lower cost and new products into the market. Right now, we want to get in early, learn often and continue to refine the product.

When we are talking Class 8, by no means does the Meritor 14Xe cater just to line haul. I think we all understand the challenges of range, weight and other things, but if you look at a drayage application the 14Xe is absolutely a fit. There is a need in California with significant targets to put zero emission vehicles in the ports. Terminal tractors are certainly a segment that we think the 14Xe is playing in right now. And then there’s refuse—we all would enjoy quiet, clean refuse vehicles in our neighborhood at six in the morning.

Speaking of comparisons to current axle technology—what about axle ratios? What does the 14Xe offer?

Reed: There are different ratios, and we will have wheel end reduction combinations and different transmissions. From an overall ratio perspective, we have a lot of flexibility, to cover as many applications as possible. So, we’re not going to market and saying this is a rifle shot medium-duty product only. We can do really Class 5 through 8 and cover 98% of what’s out there.

You mentioned smaller OEMs. What has been your impression of working with new nameplate entrants hoping to break into the market with an electric vehicle?

Reed: It’s an interesting time because you get a confluence of different perspectives and capabilities. At the end of the day, what I’m encouraged by is that we’re all on the same mission and there’s no silver bullet technology or capability. There are many different ways that we’re going to crack the code when it comes to zero emissions. I think it has forced a lot of us to reevaluate everything. There are a lot of smart people coming into the industry that are well capitalized, well resourced and have great ideas. They don’t have 100 years of experience, and so the question is: how do we bolt those two things together and all grow at the same time? You’ve seen capability from the traditional OEMs and the amount of investment and the commitments they are making. Startups are the other side of that coin.

With the type of money they are raising and the capability that they are putting in place, it’s going to be great for the fleet because they’re going to have certainly a lot of choices and strong competition. Together, we are all significantly moving the needle when it comes to zero-emission technology.

What role have OEMs and fleet customers played in the development of the 14Xe?

Reed: Obviously, with the traditional OEMs that we have existing business relationships with, there’s connections to sales organization, the purchasing organization, engineering, and so on. We have those touch points all the way at the executive level quite often, and I go back three years where we continually show our roadmap, our technology and where we are in our progress. They’re really evaluating multiple technologies and putting together commercial RFQs. That has been happening behind the scenes for three to four years, and not only locally but globally as well.

We have had programs with nearly every major OEM—they’ve either had our 14Xe on a test bench or on their track, and they evaluated it. So, they are going to know with their own data if the product is what we say it is.

On the fleet side, I would say the interaction has been tremendous. I joke with my sales team that I am running out of salespeople. There are just so many inquiries that we literally have to then manage the influx. If you can imagine, especially if you’re building a brand new vehicle, there is a lot of technical information that you need to exchange before you even get to the commercial part of it.

What operational insight do you hope to gain from participating in NACFE’s Run On Less Electric?

Reed: Data. A lot of the questions that they are asking, not only on the service side but the efficiency side, comes from an unbiased third party independent view. That is solid gold feedback to anybody that is developing a product. Mike Roeth and NACFE are certainly top-shelf, and we put a lot of value in whenever they release a report. Again, it’s part of the zero emissions transition and learning process. What we want to get from it is data and an understanding; that feedback is critical.

How do you plan to measure electric powertrain efficiency? Is it through range? Battery life?

Reed: I don’t have specific numbers here today that I can share with you, but I’m excited for when NACFE releases its report and we can have head-to-head comparison in terms of efficiency between technologies. We see efficiency gains significant enough on our simulation, both in medium- and heavy-duty, which drove us to say we not only need a two-speed transmission, but a three-speed transmission as well that gives the customer the option from the performance side.