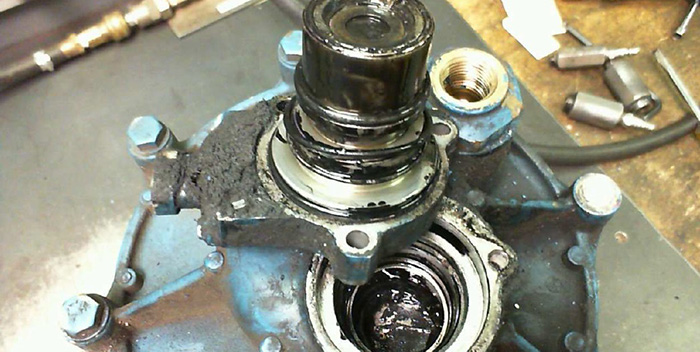 Many AMTs on the market utilize a mechatronic shifter, which combines the intelligence of electronic controls with the reliability and high power density of pneumatics. The compressed air to control these AMTs is supplied by the engine’s existing air compressor. Furthermore, most automated air controls on trucks utilize multiple electronically operated solenoids, which require both cleaner and dryer air than traditional manual brake valves, and are sensitive to both small particulate and oil contamination.

Early indicators of poor air quality can occur downstream of the compressor and air dryer, in the systems that rely on effective functioning of components such as solenoid valves for pneumatic automation and emissions controls.

“These components have very tight tolerances, and if there’s too much of that ‘toxic brew’ of contaminants, engine oil, and water, it leads to mechanical malfunctions due to fouling within valves, for example,” said Richard Nagel, director of marketing and customer solutions, air charging for Bendix. “That’s actually how many customers first realize there’s a problem with the air system: Drivers will report noticeable performance changes, like malfunctioning brake valves or an AMT not engaging or operating as smoothly as expected.”

Other signs include an excess of oil mixed with water found when regularly draining the air system tanks, and the need to replace air dryer cartridges more frequently than expected. 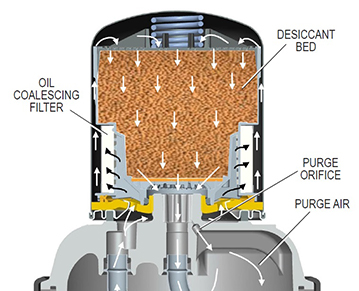 What steps can you take to address an air contamination issue? From a practical standpoint, the two key points within the air system for controlling air quality are the compressor and the air dryer.

Every compressor is designed to pass a small amount of oil in order to lubricate the piston. Depending on the compressor’s design and other factors—including duty cycle, operating temperature, age, and whether the engine is turbocharged—the amount of oil passed through can vary widely. Even a high-quality, brand-new compressor can pass a significant amount of oil per year, and poorly rebuilt compressors run the risk of passing even more.

When oil passes around the compressor piston, it mixes with moisture drawn into the engine through the truck’s air intake system, creating the potential for emulsions to build up in the air system. A compressor passing too much oil with elevated ambient temperatures can result in carbon buildup in its unloading valves, resulting in a malfunction of the unloading system. The oil and water mixture can also restrict the air passage in the discharge line.

“If the compressor is passing too much oil, you can replace the head or the unloader valves, or replace the entire compressor with a new or remanufactured unit,” Nagel said. “But it’s like anything else: If you work a compressor hard, over the years, that piston-to-bore clearance gets wider, and more oil is going to get through. That’s where the capability of the air dryer comes in.”

Standard air dryers utilize an adsorption process to bind the moisture in the air to a dessicant during the charge cycle, and exhaust air mixed with water during the regeneration or purge cycle. Clean dessicant has a potential life of millions of charge cycles, if it remains uncontaminated.

Oil that passes through the compressor, however, can foul the dessicant, preventing the dryer from operating as efficiently and effectively as it should. Bendix recommends using oil-coalescing dryer cartridges, which include an additional filter that extracts the oil from the air and collects it in the cartridge sump, where it is exhausted during the purge cycle. (The Bendix PuraGuard design actually removes oil from the air before reaching the desiccant, which alsoextends the dryer’s capability.) If a truck manufacturer specifies an oil-coalescing cartridge to protect an AMT or other system, it’s even more important to stick with an oil-coalescing replacement, since using a standard cartridge would leave those components vulnerable to higher levels of contamination. Repairing a system affected or damaged by contaminated air can cost multiple times the added expense of an oil-coalescing cartridge.

Biannual air dryer cartridge replacement is often suitable, but air system quality may depend on more frequent changes, depending on the vehicle’s design, usage, and operating environment. Running the compressor harder means consuming more air and increasing the system’s number of cycles, so vehicles with multiple axles, or vocational vehicles like gravel haulers, will have higher air consumption rates than an over-the-road truck running cross-country.

“For a long time, the design of many valves and other components in the truck’s air supply remained relatively unchanged, with internal clearances designed to operate under higher levels of contamination,” Nagel said. “Today, trucks often have more complex pneumatic systems which are more mission-critical—placing even more importance on maintaining the quality of the air they use to operate.”

This article was contributed by Bendix Commercial Vehicle Systems.

2021 model year diesel engines: What you need to know

TomTom, Bosch, Daimler collaborate on ADAS
Connect with us

Heavy-duty: 2021 model year diesel engines: What you need to know