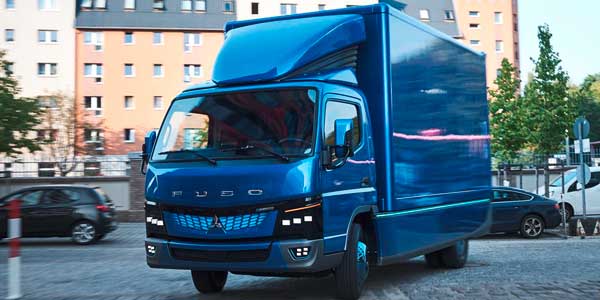 Knowing that the current low prices of diesel won’t last forever, cost-conscious fleets in medium-duty segments are starting to look toward alternative sources of fuel for the future.

This year, there have been several big announcements involving electric trucks, including Mitsubishi Fuso bringing a limited-production line of fully electric trucks, known as the eCanter, to market in the U.S., Japan and Europe before the end of 2017. The eCanter is a Class 4 truck with a 15,995 lb. GVWR and a payload capacity of roughly 9,380 lb. It has a practical range of up to 100 miles, one-hour quick charge capability and a standard eight-hour overnight charge. It will be the first 100% plug-in electric work truck designed and produced by a major truck manufacturer, the company noted.

Click here to watch a test drive of the eCanter and a look at its unveiling at this year’s Work Truck Show.

“Trucks with all-electric powertrains are low-maintenance, the battery charge is enough to get you through a full day of routes, you’re offsetting a large amount of fuel consumption and you’re locking in a very stable rate for fuel,” says Jim Castelaz, Motiv’s founder and chief executive officer.

Electrification offers the greatest value to garbage trucks, delivery trucks, buses, local-duty, pickup-and-delivery applications, etc., but has not made its way to applications like linehaul because, as Castelaz says, the battery technology “is still growing.” There are already pilot programs for long-haul trucks, mostly in sea ports. As battery technology improves and the pilot programs progress, the idea of seeing an electrified Class 8 on-highway truck comes closer to reality. “Without even too great a jump from today’s technology, we could almost entirely electrify our cities,” Castelaz claims.
“The biggest obstacle for the electric truck business is that when truck OEMs decide on their product roadmap, they commit to a technology and they invest the engineering to build tens of thousands of whatever they’re building, and that allows them to bring their costs down,” he continues. “There hasn’t been that level of investment with all-electric trucks because that market just doesn’t exist yet.”

It’s a bit of a chicken-and-egg situation: because companies are not building tens of thousands of electric trucks, the price is high, and because the price is so high, they aren’t getting the orders to begin that type of mass production.

“It’s about overcoming these low-volume manufacturing costs and getting the demand for electric trucks to that scale,” Castelaz says. “Passenger cars are getting to that point, and we need to see that type of momentum for trucking.

“We’re going to start to see these numbers climb as more OEMs such as Mitsubishi Fuso become interested in electrification, which will help bring those costs down and make the prices more competitive,” Castelaz says, adding that he believes this can happen in the next five years.

Another reason for the somewhat slow growth of electric power in the trucking industry—and all alternative fuels, for that matter—has been the low prices of diesel fuel over the past two-plus years. However, Castelaz says that, contrary to popular belief, the low diesel prices actually make it a better time to invest in electrification.

“Electric trucks are dependent on the price of fossil fuels to a degree, because when the cost of fuel is really high, electric trucks become comparatively more attractive,” he says. “But when the price of fuel is low, it’s actually the ideal time for fleets to start investing in energy independence, because they have that extra room in the operating budget to start taking that longer-term view.”

The future of electrification