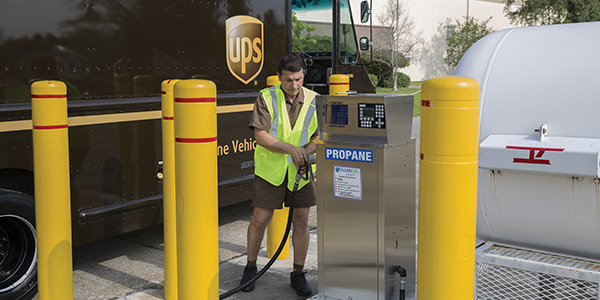 UPS will try anything once.

With trucks of all sizes sporting its signature brown in applications that start at the first mile and end at the last mile, UPS has been building business cases for the latest and greatest equipment since its founding in 1907. Instead of waiting for equipment manufacturers to ask, “What do you need?” UPS turns to them and says, “What do you have?”

“It doesn’t matter what the costs are if the new technology won’t work for the demanding UPS duty cycle,” said Bill Brentar, senior director of maintenance and engineering for transportation equipment with UPS, explaining the fleet’s approach to testing new technologies. “New technology must first be tested to see if it works. This is the first step in the process with a full understanding that cost plays a major role for future deployments.”

That’s where UPS’s Rolling Laboratory comes into play. It’s a transportation equipment and technology incubator on wheels, employing the latest alternative fuels and powertrains to test the technology boundaries and fit them into applications in which they excel.

“There are unknowns and calculated business risks even after a successful pilot test,” Brentar said. “Subsidies can be important to encourage early adoption, build real-world data and jump start volume for economies of scale. Beyond that, it is important for UPS to see the investment in the technology can stand on its own value without subsidies.”

UPS’s Rolling Laboratory keeps pace with today’s continually advancing truck technology, and the innovations you’d expect them to test are there—the latest in today’s all-electric powertrains and hydrogen fuel cell power, for example—but there are a few that may surprise you.

The most notable would be UPS’s continued usage of natural gas. In June, UPS announced that it would add more than 700 new compressed natural gas (CNG) vehicles, including 400 semi-tractors and 330 terminal trucks, in addition custom-built, on-site natural gas fueling bringing the total investment to $130 million.

Why would UPS invest in an alternative fuel technology that has seemingly stepped out of the equipment limelight? The answer is simple: It works for them.

“The UPS natural gas fleet is an example of the Rolling Laboratory’s success,” Brentar said. “This fleet of more than 5,200 natural gas vehicles now runs in excess of 8 million miles per week with very good reliability. It shows that UPS has the expertise, commitment and scale that can lead to significant change in the industry.”

That’s not to say natural gas is the only alternative fuel in its fleet. UPS also employs propane, electric and hydraulic hybrids, all-electric, ethanol, and biomethane (RNG).

Moving forward, one of UPS’s big innovation initiatives is the development of the next generation SuperTruck. To tackle the task, UPS has partnered with Kenworth for the SuperTruck II program with the aim of demonstrating greater than 100% improvement in freight efficiency over 2009 equivalent products, and a 55% engine increase in brake thermal efficiency performance.

“Participating in these types of programs allows fleets to have input on future technologies and real-world applications; it allows the user to share inputs such as duty cycle, maintenance requirements, operating environments and other fleet-specific requests,” Brentar explained. “This initiative will also help support UPS’s sustainability commitment to reduce its absolute greenhouse gas (GHG) emissions from global ground operations 12% by 2025.

“Technology is advancing more rapidly than ever before,” Brentar continued. “UPS explores, engages and provides input. Although all projects do not result in large scale deployments, they give us valuable experience for future decisions.”

Inside the UPS Rolling Laboratory