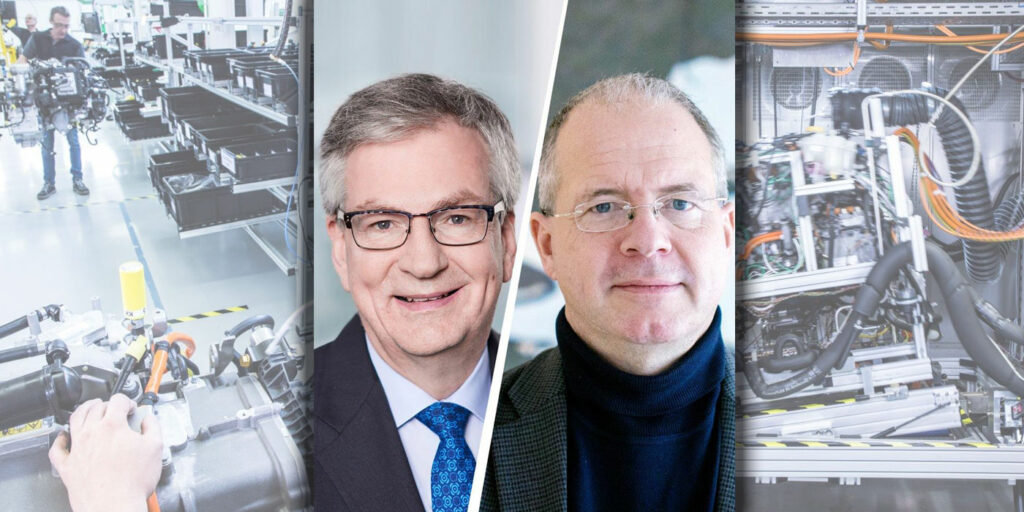 Make no mistake: The trend of increasingly sustainable truck equipment technology is here to stay, with even more equipment advances coming down the line to meet an array of trucking applications. That was the tone set by the leaders of two global truck manufacturers–Martin Daum, chairman of the Board of Management of Daimler Truck AG and member of the Board of Management of Daimler AG; and Martin Lundstedt, chief executive officer of Volvo Group–who stood side by side during a virtual press conference stage to detail their roadmap for cellcentric, a joint venture between two OEMs to “accelerate the use of hydrogen-based fuel cells for long-haul trucks and beyond.”

Much of the press conference was focused on European sustainability needs and goals, but nothing in trucking happens in a vacuum. Time and time again, we’ve seen truck technology make its way over from across the pond (and vice versa). With these two truck manufacturing giants coming together to tackle the hydrogen fuel cell challenge, it’s a safe bet that this will have major implications for the North American market as hydrogen begins its long haul toward its market introduction.

So here are the top three takeaways from the cellcentric press conference.

to some degree. Right now, that is more true in Europe than the U.S. given the Paris Agreement and European Green Deal requirements. Daum explains:

“As a chairman of the European Truck Manufacturers Association, ACEA, the entire industry is fully committed to the Paris Agreement and the European Green Deal, which requires that the entire transport industry is emission free by 2050. That means that we sell the last carbon combustion engine at least by 2040, if not earlier. To reach that extremely ambitious goal, we definitely need hydrogen fuel cell systems and infrastructure for that.”

Ambitious to be sure; doubly so in North America where the routes are typically longer than European hauls. Not to mention that the U.S. sustainability standards aren’t yet as progressive as the aforementioned European standards, though the Biden administration has recently announced the goal of cutting greenhouse gas emissions by 50% come 2030.

Nevertheless, the global truck OEMs aren’t hitting the brakes on sustainable transportation equipment development now that a bulk of them have rolled out their battery electric trucks for order in North America. Hydrogen fuel cells aim to open up more applications to sustainable equipment options.

“When we talk about longer distances, more heavyweight applications, fuel cell electric vehicles will be very well suited. In particular, for demanding long-haul applications with a high level of flexibility, long range, forced refueling and high payload,” Lundstedt said. “That’s the reason why we all joining forces together with Martin Daum and Daimler to create cellcentric, to build upon the strengths, to skill foster, to show a clear direction moving forward, and really to make sure that we are all investing here and now, to really hand over a planet for coming generations.”

The preceding provocative takeaway header aside, the conversation clearly doubled down on the importance of hydrogen fuel cells as a legitimate sustainable solution in the near term. For cellcentric’s part, the development team is working to make the hydrogen fuel cell a reality within a large-scale gigafactory for fuel cell production by 2025, with the location and more details to come in 2022. Currently, cellcentric is scaling up ongoing prototype output.

“We have been talking about the potential of hydrogen for quite some time,” Lundstedt said. “I’ve been in this industry for 30 years and we have always said that it’s about 10 years away and then 10 years away, but now we are really getting there. We see a clear roadmap for execution, both when it comes to technology and commercialization.”

2. Long-term infrastructure needs will go way beyond what we need now

Infrastructure demands are complicated enough for fleets trying to figure out how to charge 10 trucks, but what about 100 trucks? A thousand trucks? Or, from the energy provider’s point of view, millions of power-hungry electric vehicles on the road 20 to 30 years from now? The foundation of tomorrow’s infrastructure needs is being laid today.

“Hydrogen has one big advantage,” Daum noted, “It scales nicely. That means as more people use it, the cheaper it gets.”

That’s not to say it isn’t a challenge.

“The infrastructure is a huge undertaking, as huge or even larger than what we have to do on the vehicle side,” Daum continued. “Infrastructure has to start in parallel [with vehicle development]; therefore, we need that cooperation with the energy companies, and we need the support from politicians to get that initial investment up and going because otherwise, it doesn’t matter how good our product offering is, the sales would still be zero.”

Daum is speaking to the European governments here, but it’s a parallel that can be drawn to what’s needed in North America as well. In fact, in a recent webinar on the heels of the announcement that Daimler Trucks North America’s Freightliner eCascadia and eM2 were available to order, DTNA leadership noted that government support and incentives will be a needed component to help boost electric vehicle demand.

The same is true for hydrogen fuel cell trucks.

“The good news in this equation is, on the cost parity side, [we have] a clear roadmap,” Lundstedt said. “Energy companies are stepping up … we have policymakers talking about what they can do to get to these levels of infrastructure and to get the critical mass because then it will fly on its own and deliver what we need to do when it comes to the Green Deal.”

In the U.S., the jury is still out on what the infrastructure legislation will comprise. Nevertheless, companies like Shell have noted their interest in hydrogen fuel cells.

3. Daimler Trucks and the Volvo Group are still competitors

…but they have a shared sustainability outlook.

A quick personal side note: It is … well, strange to see the leaders of two very competitive OEMs standing side by side on the same stage, sharing the same spotlight and talking about shared fuel cell technology, especially when both brands in North America continue to innovate with their own proprietary integrated diesel powertrains. So how do we make sense of this? What does this mean for both the companies and the industry?

“Martin Lundstedt and I have a lot in common, and we share the same vision when it comes to emission-free driving in the future, but there is one huge difference between the two of us where we completely disagree,” Daum said. “Martin Lundstedt thinks that Volvo and Renault Trucks are the best in the world, and he’s completely wrong, because I think Mercedes trucks and Freightliner trucks are the best in the world. We want to let the customer decide which one is better.”

Currently, the plan for cellcentric is to supply hydrogen fuel cells to both Daimler Trucks and the Volvo Group brands, in addition to being available as a supplier to other OEMs.

“Everything after the fuel cell, I know what Mercedes is doing, but I have no clue what Volvo is doing,” Daum said. “For Martin Lundstedt, on the other side, it’s the same. There will be an exciting truck coming out from Volvo, but believe me, there will be exciting trucks coming out for Mercedes and Freightliner running on fuel cells. They will be different, and the customer ultimately will decide which is the better one. So yes, we are competitors, but when it comes to the heart of the power source, we are completely cooperating together.”

“When it comes to future transformation, sustainability efficiencies must be taken extremely seriously in these competitive landscapes,” Lundstedt said. “Obviously, the race is on when it comes to trucks and I couldn’t agree more that we are, of course, thinking differently in different aspects, but to drive real change and compete on a new platform is what cellcentric and the whole corporation is all about.”