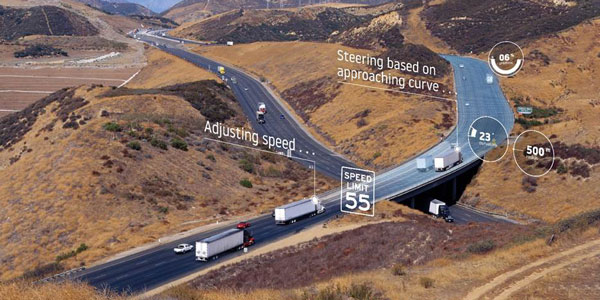 Trucks use TomTom’s ADAS map and Bosch’s electronic horizon to automate driving functions on highways and, in Europe, on inter-urban roads.

Trucks use TomTom’s ADAS map and Bosch’s electronic horizon to automate driving functions on highways and, in Europe, on inter-urban roads. TomTom says the system leads to a fuel reduction of up to 5% per vehicle. In the new generation of the Mercedes-Benz Actros, the latest PPC technology is available. The public premiere was at IAA 2018.

As the first smart cruise control system in commercial vehicles, PPC actively controls engine, brakes and automated transmission. Thanks to TomTom’s ADAS map, according to the company, the system is familiar with the topography, curvature, speed limit (including truck-specific speed limits) and traffic signs.

Bosch’s electronic horizon is used to integrate knowledge of the road ahead into the driving strategy of the new Mercedes-Benz Actros.