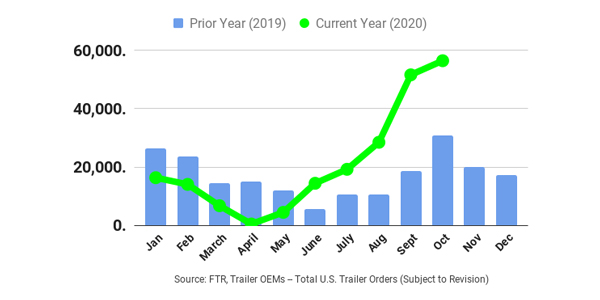 According to the latest numbers from both FTR and ACT Research Co., trailer orders continued to improve in October.

According to ACT Research, after sinking to the lowest point in history in April, net trailer orders have continued to improve throughout the summer and into fall.

Fleets again ordered dry vans and refrigerated vans in large quantities, FTR reports, most for delivery in the second half of 2021. Flatbed orders improved and should reach their highest total this year. Backlogs are expected to rise to levels not seen since mid-2019. The order volume should enable the OEM’s to increase build rates entering 2021, FTR says.

The surge in consumer-based freight continues to strain capacity and boost freight rates, FTR says. Healthy fleet profits are resulting in large trailer orders for replacement of older dry vans and reefers and also for expansion due to the chaotic freight environment. Carriers are utilizing more drop-and-hook runs to compensate for the current driver shortage. Compounding the problem is a pronounced shortage of wood and aluminum components, which is limiting OEM van production. Fleets are concerned about these supply issues continuing, so many are placing all their requirements orders for 2021 now to lock up future OEM build slots, FTR says.

“This is a repeat of 2018 when fleets placed huge orders in September-October to reserve build slots in 2019. Then, it was because the hot demand was outstripping OEM and supplier capacity,” said Don Ake, FTR vice president of commercial vehicles. “Now, it’s because the pandemic has disrupted the supply chain and some essential components are having trouble making it through the pipeline fast enough. We would expect these bottlenecks to be resolved over the next few months, resulting in some of the large orders of the last two months being canceled or pushed out next summer as happened in 2019.

“There are still significant risks due to the increase in positive COVID-19 tests,” Ake continued. “The industry powered right through the summer despite rising infections. There is strong positive momentum right now, but it remains to be seen if possible new health restrictions will slow down the growth of freight. This industry is known for wild demand swings and we’ve gone from record low orders to record high orders in just seven months.”