How to spec the right axle configuration 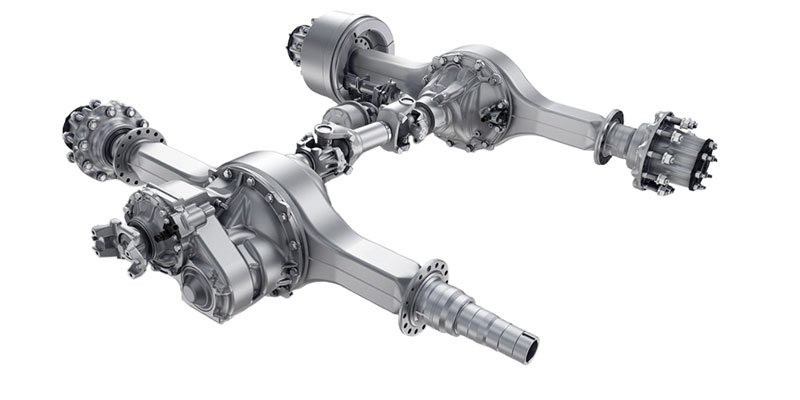 Spec’ing a truck means considering—and sometimes reconsidering—almost every aspect of the vehicle. That includes components that previously never required much choice.

Take drive axle configurations, for example. For a long time, the standard was a 6×4 configuration in which both rear tandem axles receive power. Trucks came with 6×4 regardless of the jobs they were designed to do. However, some fleets and drivers have been switching to 6×2 configurations in which only one of the rear axles receives power. The other is a “tag” or “dead” axle whose only function is to bear weight.

There’s no right or wrong configuration. Spec’ing one over the other comes down to decisions about applications, driving surfaces and weather conditions, fuel efficiency, load weights, driver preference and more. Let’s look at the pros and cons of each axle configuration.

6×4 – It makes sense that a 6×4 configuration has been the standard for so long. Trucks need a lot of torque and traction to perform. Having tandem drive axles pushing four drive wheels makes it easier for them to accomplish their jobs, while also improving handling and overall performance.

Trucks with 6×4 configurations also have higher resale values because they’re suitable to more applications, particularly vocational jobs. That could change, however, if more fleets move to 6×2 tractors. Also, many truckers are more comfortable with the 6×4 configuration, which could be a factor in driver recruitment and retention.

6×2 – Given the proven track record of the 6×4 configuration, why would a fleet manager or owner-operator spec a 6×2?

For many, it’s driven by the quest for greater fuel efficiency. A 6×2 configuration generally delivers better fuel mileage. The North American Council for Freight Efficiency, which endorses 6×2 axles, estimates that spec’ing a 6×2 axle configuration could result in a fuel mileage increase of up to 2.5%.

The efficiency comes about because a tag axle lacks internal gearing, which contributes to reduced parasitic power losses through the rear axle and results in weight savings of up to 400 lbs. compared to a 6×4 system. The weight savings also makes it possible to pull a heavier load while staying under legal limits. Tag axles also require less maintenance than drive axles, which can save time and money.

The tradeoff with the 6×2 configuration is less traction and torque. With only half the number of drive wheels, a 6×2 truck does not have the same amount of traction as a 6×4. How much that matters depends largely on how the truck is used and where. A vocational truck that goes off road is more likely to need the extra traction. Less traction also can be a safety issue when driving in ice, snow and rain or on steep grades.

Of course, the loss of traction can be offset by load shifting techniques that increase weight on drive axles at low speeds and through traction control and automated load transfer systems.

Also, a 6×2 configuration is tougher on tires because all the torque must be managed by two wheels, not four. That can shorten tire life, at least until drivers are trained in gentler takeoffs.

In general, a 6×2 configuration is well-suited for OTR applications that drive on dry, flat roads while a 6×4 configuration is best for a northern or hilly terrain, where trucks need more traction. However, a 6×4 configuration can also be considered for OTR routes because they may encounter all types of terrains on just one run, and the increased traction provides reliability and peace of mind for the driver.

Brian Daniels is the manager of Detroit powertrain and component product marketing.

For more on this topic, click here to read How do my truck’s axles work with…