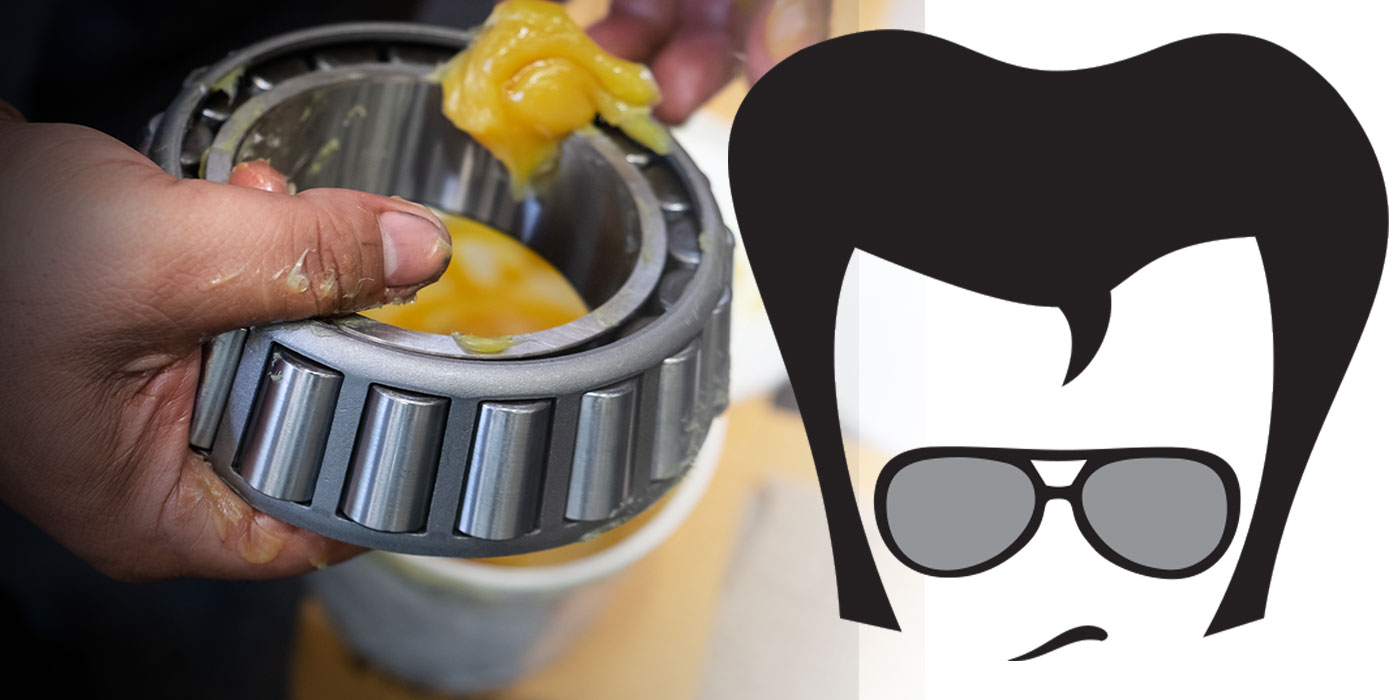 How can you tell if you’re using the right grease?

Some will say a grease is best judged by how tacky it is—simply place a bit between the thumb and forefinger and pull. Others say the best greases are brightly colored. And there are those who say as long as you’re using their go-to brand, grease is grease, as long as it isn’t too old.

Here’s the answer: There is no easy answer. Instead, there are a multitude of factors to consider when making your choice. Grease is complicated; Sandy and Danny’s relationship was child’s play compared to the stuff technicians are applying to your trucks.

You’re the one that I want: Selecting the proper grease

The fact is that grease is one of the most misunderstood products available to fleet professionals, says Ron LeBlanc, senior technical advisor for Petro-Canada Lubricant. It pays to know more about using the right grease in the right application.

“It’s vitally important to have the correct grease in the right grease point. In fact, you need the right grease, in the right place, in the right amount at the right time,” LeBlanc says. “Grease is often selected by price and not necessarily based on the application or ensuring the reliability of the equipment. Selecting an improper grease can result in more reactive maintenance and equipment breakdowns, and therefore costly downtime, so it’s important to seek expert lubricant advice to help keep a fleet on the road and prevent unplanned downtime.”

Thankfully, according to Dan Holdmeyer, industrial and coolants brand manager at Chevron, having the right greases on hand doesn’t typically translate to a fleet needing to buy dozens of different greases for each different grease point on the truck. In fact, Holdmeyer says some fleets can get away with using only a handful.

“Many fleets have consolidated to one or maybe two different greases for the fleet, three if you also consider the semi-fluid grease in the trailer axles,” he says. “Specific greases for specific applications on the rigs can extend re-grease intervals, however, most fleets find it useful to limit the number of greases and optimize the re-grease interval for their operations.”

So, where do you start if you’re ready to revamp your greasing operation? First, know that greases are typically divided into categories. Jim Salmon, technical manager at D-A Lubricant, says some of the greases you’ll run into in the heavy-duty trucking world include:

From there, he says, grease properties can still vary wildly, so it’s important to consult the OEM before deciding what grease to use on a specific grease point.

“‘All greases are the same’ couldn’t be farther from the truth. Greases come in many different grades, use different thickeners, different base oils; some are extreme pressure (EP); some have better tolerance for high temperatures; some offer lighter base oils, while others can be difficult to pump,” Salmon says. “The majority of OEMs have tested or rely on the test results of other agencies to help determine what type of grease works best for their specific application. For best results, consult your manual to determine what type of grease is desired, then consult your grease provider for a product meeting the OEM’s requirements.”

Hot Shot’s Secret Vice President of Research and Development Kevin Adams says even when working with the OEM, it’s important to know how to apply the NLGI Consistency Grade Scale, which assigns ratings corresponding to the hardness of a grease, to a fleet’s application.

The scale ranks greases from 000 (“very fluid” – the consistency of cooking oil), and gets gradually thicker with 00, 0, 1, 2, etc., all the way up to 6 (“block” – the consistency of a hard cheese). Adams says most trucking applications require NLGI No. 1 or 2 greases, but notes that some sealed bearings require a semi-fluid NLGI 00 grade grease.

“NLGI No. 1 is often used in cold weather applications due to its better cold flow properties. Ideally, shops should have at least three types of greases on hand: a chassis grease for items such as slack adjusters and ball joints; a synthetic grease for the differential and wheel ends and another grease for fifth-wheel top plates,” Adams says. “The bottom line is to start with what the manufacturer recommends and then make adjustments for season. Consulting for what the manufacturer recommends is critical, especially for an area like wheel bearings.”

We go together: Is it safe to mix greases?

If you decide to change the grease you’re using on a specific grease point, it’s important you are confident the old and new greases will be compatible with each other.

Chevron’s Holdmeyer says because most greases supplied to the heavy-duty trucking industry are lithium-thickened greases, there is a good chance the mixed greases will be compatible.

For a service technician to be absolutely sure, D-A Lubricant’s Salmon recommends she purges the old grease completely with the new grease before putting the unit back into service.

“Even those [greases] with similar thickeners or base oils can react to each other,” Salmon says. “Hardening of the greases at the point where they contact each other or separation of the thickener from the base oil can occur, causing the grease to ‘run out.’”

Hot Shot’s Secret’s Adams recommends cutting the service interval in half for two periods to ensure the area is protected when adding a new kind of grease to any grease point.

Hopelessly devoted to you: Choosing grease based on color

Grease experts say that it’s common to find some technicians will stick to using a certain color of grease—be it white, green, black, or anything else—perhaps because that’s a color where they found success in the past.

To these technicians, Petro-Canada’s LeBlanc suggests redefining how a grease is chosen.

“Ultimately, the color of a grease is not related to its performance, and it’s vitally important that technicians and fleet professionals focus on the performance of the grease rather than its color or hue,” LeBlanc says. “The color of grease tends to follow trends of what’s popular. For many years it was white grease, then red and for a while, even very bright blue grease was popular amongst technicians and industry professionals. However, each of these colors was typically related to a particular brand and helped provide brand recognition. These colors were due to dyes and they don’t have any impact on the performance of the grease.”

There are times when a grease’s color can be helpful in knowing what is in it, though. For example, LeBlanc says greases that contain molybdenum disulfide, which provides added protection in pressured environments, can be recognized by their distinctive grey color.

Chevron’s Holdmeyer says this can be a helpful identification tool for this type of grease, as he says using it in rolling element bearings like wheel bearings is not advised.

“The other colored greases are colored for marketing purposes and for user identification. As long as the user is buying grease from the same supplier, the user can quickly tell when a different grease has been used,” Holdmeyer says.

Hot Shot’s Secret’s Adams adds: “Color can help the tech determine if the wrong grease was installed in the grease gun.”

Just when you think you have your heavy-duty greases sorted out, the weather changes. Grease experts say your climate can affect your greases more than you might expect.

“The weather conditions can dictate the proper grease for a fleet, as the climate in Phoenix, Arizona is very different to Prudhoe Bay, Alaska. The Pacific Northwest has four distinct seasons, so grease is very important for protecting components from the wet, cold, dusty and saltwater environment,” says Petro-Canada’s LeBlanc. “By selecting a grease based on the application and operating environment of the fleet, the savings on equipment maintenance and reliability will be significant.”

Chevron’s Holdmeyer says knowing a grease’s dropping point—the point at which it turns to a liquid state—can be important in some climates to prevent overheating.

“High dropping point may be needed with mountainous terrain that results in heavy braking and high temperatures,” Holdmeyer says.

“Synthetics are more expensive but often have a payback due to their oxidation resistance and ability to maintain the same consistency in all weather conditions,” Adams says.

LeBlanc reminds due to the complexity of choosing the right grease, it’s important to work with a trusted service advisor who can share their expert advice and experience.

“Specifying the correct grease for a fleet can be a challenge as there are a multitude of factors to consider; that’s why it’s important to seek expert advice from technical service advisors,” he says.

When faced with lubricating the rubber parts of electrical connectors or spark plug wires, dielectric greases must be used. That’s because dielectric grease is made with silicone, an excellent electrical insulator with a relatively high thermal stability.

“Dielectric greases are used in high voltage situations to insulate electrical connections, and to help seal out moisture and other contaminants that may cause deterioration to connections,” says D-A Lubricant’s Salmon. “They can also act as a barrier to prevent arcing between conductive surfaces. They are primarily known for their insulative rather than anti-frictional properties.”

Hot Shot’s Secret’s Adams adds that because dielectric grease is formulated so no electricity can pass through it, it should never be used on the mating surfaces of an electrical connection.

Grease experts warn not to over-grease any grease point of any component. It’s important to apply the right amount of grease at the right time.

“Over-greasing can often be the result of a poor grease or misapplication, while consumption of grease can be reduced by using a high-quality grease that is correct for the application,” says Petro-Canada’s LeBlanc. “Over or under-greasing can result in premature failure of equipment bearings and therefore increased maintenance.”

Is it time to re-think your grease?