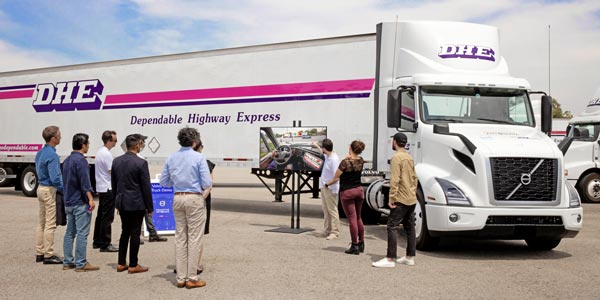 This project leverages human intuition artificial intelligence that reads the intention and awareness of vulnerable road users such as pedestrians, cyclists and motorists, Volvo says.

Volvo Trucks North America, along with Perceptive Automata and Dependable Highway Express (DHE), have showcased a collaborative project designed to strengthen safety capabilities for the trucking industry through automation. This project leverages human intuition artificial intelligence that reads the intention and awareness of vulnerable road users such as pedestrians, cyclists and motorists, Volvo says.

Volvo Trucks says it recognized the need to augment situational awareness and better anticipate human behavior while on the road. The company developed a proof-of-concept together with Perceptive Automata and DHE which was recently demonstrated at DHE headquarters in Ontario, California recently.

Perceptive Automata has AI software that ingests data from on-vehicle sensors and, like humans, assesses in real-time the likely intention and awareness of pedestrians, cyclists and other drivers by reading visual cues such as eye contact, posture, physical orientation and head movements, Volvo says. Increased safety is achieved through continuous 360-degree monitoring of human road users near the truck and, when warranted, signaling to the truck driver and on-board automated systems increased risk based on changes in human intention, according to Volvo. This enables earlier preventive actions by the truck driver, supported by the truck’s automated systems, to reduce the likelihood of accidents and to help modulate the amount and severity of braking and acceleration.