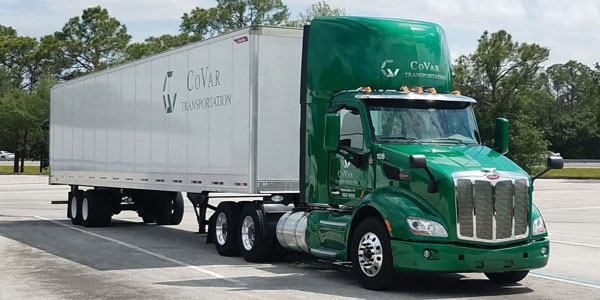 For Dillon Varanay, vice president and co-founder of CoVar Transportation, ongoing success stems from focusing on what you do best and effectively serving customers. “In our case, we have made some decisions that have paid off,” he says. “Now we’re a smaller but more profitable operation because of those choices.”

Founded in November of 2014, CoVar is a partnership between Varanay and his brother-in-law, Collin Cole, who serves as the company’s president. The name CoVar comes from the combination of their last names.

“We found our niche and settled on hauling mainly water and paper goods intrastate in Florida,” Varanay relates. “That concentration on serving specific customers insulates us from market ups and downs, lets us haul more freight in high cube trailers at better rates and have a faster ROI on transportation costs.”

Focusing on one geographic market has also helped CoVar address driver recruitment and retention. “We had a lot of turnover in our bulk operation,” Varanay relates. “In our dry van fleet, though, we’ve only had two drivers leave in three years; they can be home every night and we can afford to pay them more than the competition.

“Most of our drivers came from big companies so they appreciate the closeness of a smaller enterprise,” Varanay adds. “In fact, when we do need to hire a driver they come to us through referrals from our current operators.” 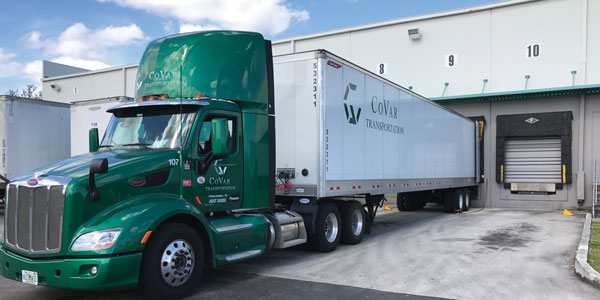 Varanay also says that CoVar is able to attract and keep drivers because it provides them with leased late model premium tractors, a decision that stemmed from a costly lesson. “When we started out, used trucks seemed like the logical play,” he relates. “It gave us trucks to run in our operation immediately, but it ended up giving us unreliable equipment. Within two weeks, we started having issues. We always had trucks in the shop and had to have trucks towed, and we were paying our drivers to sit, not haul freight.

“It also didn’t sit well with customers who saw delays as a concern about our service,” Varanay continues. “After getting the original trucks fixed, we made the wrong decision again to buy more used trucks. We were learning a very painful lesson the hard way, one that made us go into the red instead of the black.”

In retrospect, Varanay now says that instead of kick-starting the company with used trucks, available capital would have been better spent on leased tractors. “When we ran the numbers we quickly realized we would have been ahead by $200,000 if we had leased from the start,” he relates. “Leasing would have helped ensure dependable deliveries, eliminated headaches and meant writing just one predictable check each month, not making multiple payments for service, repairs and rentals.”

Today, the CoVar fleet is supplied and maintained by Rush PacLease in Tampa, Fla. Tractors include Peterbilt Model 389s that were previously used in bulk operations as well as some lighter weight Peterbilt Model 579s sourced for dry freight loads. The company is also leasing its 21 dry van trailers from four companies and prefers 53-ft. Great Dane Champion models.

“We like the Model 579s, and we’re getting a 2 MPG boost in fuel economy over our owned trucks with them,” Varanay says. “But we’re also big fans of the traditional big hood look of the Model 389. It’s not as aerodynamic as the 579, but they really showcase our company. Both models are great. We just wish we had started out with leasing because leased tractors allow us to make sure we are a reliable source of transportation and have lower costs.”

Providing dependable service is a goal that is also being addressed at CoVar with Fleetmatics satellite-based GPS tracking systems that allow the company to manage its operation more effectively, deal quickly with breakdowns, and keep drivers and loads on schedule. The carrier also uses Fleetmatics for ELDs and Internet Truckstop (ITS) to assign loads to drivers.

“We understand that whether shippers are transporting goods throughout a state, region or across the country, they should not have to worry about whether their trucking company is taking care of their investment,” Varanay says. “At CoVar Transportation we’re always looking out for our customers and ways to serve them more effectively. By doing that, and by focusing on what we do best in terms of services and the markets we serve, we have been able to realize steady growth.”

What CoVar Transportation focuses on for steady growth and profitable operation