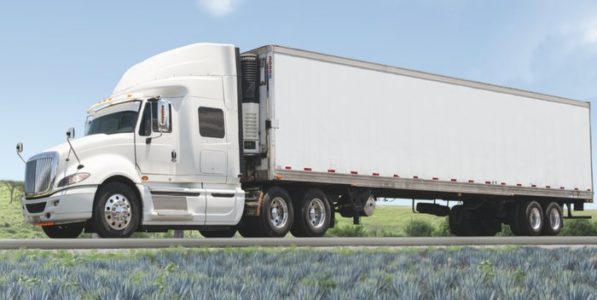 A recent study from the North American Council for Freight Efficiency (NACFE) and Carbon War Room followed 17 fleets and found that they saved $500 million in fuel compared to the national average in 2015, thanks to their adoption of various fuel efficiency technologies. These fleets also saw a 3% improvement in fuel economy compared to their own 2014 numbers; the average MPG for these fleets improved to 7.06 in 2015, up from 6.87 in 2014.

“If you look at a five-year timeframe, we’re seeing some pretty substantial differences in fuel economy between the truck that’s being traded in, say, a 2010 model year, and the new ones that are being operated now,” says Dave Schaller, NACFE’s industry engagement director. “We’re looking at close to a 16% gain in fuel economy between the truck you’re stepping out of and the truck you’re stepping into, and that’s pretty exciting stuff.” 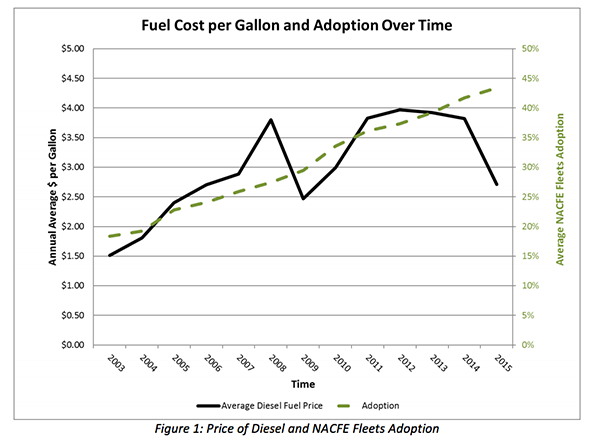 The report also covers the adoption rates and fuel economy improvements of various fuel efficiency technologies, including idle reduction, tire pressure monitoring systems and automated manual transmissions, among others, stating that adoption of most of these technologies has continued to increase despite the low diesel prices we have experienced in 2015 and 2016.

The report includes a “business-as-usual” graph (pictured below) that estimates where fleet economy would be if they did not adopt these technologies. 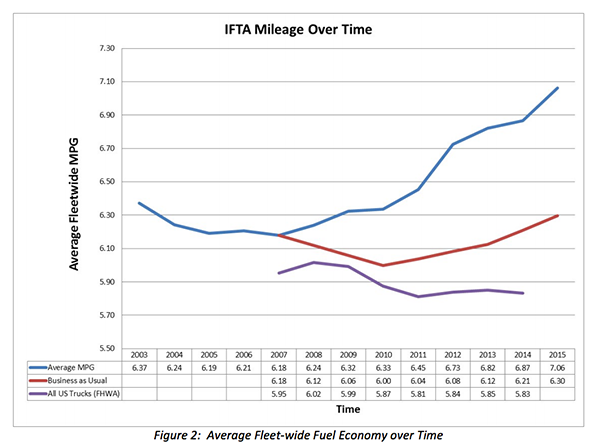 “The fleets in the study followed the blue line, but they could have followed the red line if they did not adopt these technologies,” explains Mike Roeth, executive director of NACFE. Roeth acknowledges the speculative nature of this kind of graph, but says that it represents their best estimate of what might have happened in that scenario.

The report states that the fleets see a return on investments on these fuel efficient technologies in roughly two and a half years, though of course this depends on the fleet and which technologies it decides to spec.

In total, 69 different fuel efficiency technologies were used by the various fleets. However, each fleet invests in varying levels or amounts of this technology. It’s hard to say which technologies are helping more or less than the others. Still, NACFE was able to glean a number equipment trends. According to Roeth, two efficiency solutions that stand out with the potential for wide-ranging adoption in the future, they are trailer aerodynamic fairing and tire inflation technology for trailers.

Regarding aerodynamic fairings, Roeth says, “The [GHG] rule encouraged adoption of trailer skirts, and as the scale of adoption increased, the cost went down and the quality improved, and they delivered better for the fleets.”

As for onboard trailer tire inflation, Roeth says, “All fleets are buying some tire inflation for trailers, it’s more or less becoming a standard for progressive fleets. But, we did find a couple of cases where the fuel prices leads to fleets stalling their adoption of these.”

RELATED: A deep dive on NACFE’s study of trailer aerodynamics.

The 6×2 axle configuration is one such technology that has stalled among fleets.

“The 6x2s continue to be a challenge—I don’t think we saw any fleets [in the study] increase adoption of 6x2s, and a couple are rethinking it,” Roeth says.

Some may expect that the reason for this stalled growth has to do with increased toll bills, but Roeth says it’s more complicated than that.

“It’s one of those technologies that drivers don’t really want or appreciate,” he says. “Right now, it’s tough finding drivers. Many fleets have decided to stop buying some technologies that require a lot of driver intervention.”