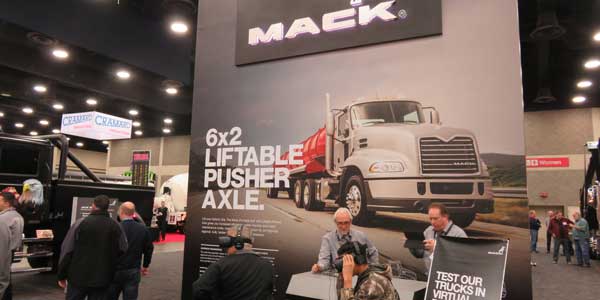 Mack Trucks announced a new Automatic Standby Mode for its 6×2 liftable pusher axle, available on Mack Pinnacle highway models. The 6×2 with liftable pusher axle offers improved fuel efficiency and productivity benefits and is designed for applications that haul out heavy and return empty, such as bulk haul, Mack said. The addition of Automatic Standby Mode eliminates the need for the driver to manually push buttons to initiate standby mode, simplifying operation, the company added.

Mack has also added rear air disc brakes as an option to its 6×2 liftable pusher offer.

“The Mack Pinnacle 6×2 with liftable pusher axle model really helps those customers in bulk haul applications save on fuel because sensors lift or lower the axle to decrease or increase traction, providing better performance and ride,” said Roy Horton, Mack’s director of product strategy. “The addition of Automatic Standby Mode further simplifies things for the driver by eliminating any need for manual input in putting the truck in standby mode to prevent overload.”

When the ignition is off, Automatic Standby equalizes the suspension pressure, preventing the rear axle from being overloaded. The driver does not have to remember to initiate the standby mode and also does not need to remember the button sequence to put it in standby.

During normal operation, control of the lift axle is automatic based on payload. The system offers a manual control feature that enables a driver to raise or lower the suspension for easier landing gear retraction or trailer hook-up respectively. 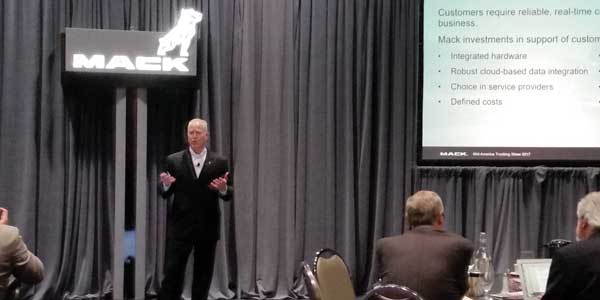 “Our Super Econodyne rating was previously only available with the overdrive version of the mDrive, but the recent release of numerically lower rear axle ratios allows us to use the direct drive variant,” said Scott Barraclough, Mack’s technology product manager. “The result is up to 1% better fuel efficiency on top of the 3% Super Econodyne already delivered on its own.”

Despite a numerically higher top gear ratio, the direct drive mDrive is inherently more fuel efficient thanks to reduced parasitic losses, according to Mack, which is due to the fact that torque is not transmitted to the direct drive mDrive’s countershaft while in top gear. Instead, the transmission’s input and output shafts are essentially locked together.

Super Econodyne Direct is best suited for applications of 80,000 lbs. GCW or less where drivers remain in top gear for a large percentage of time, according to Mack. It also works best on mostly flat terrain and when drivers remain mostly in constant speed, according to the company.

Advertisement
In this article:Axles, Engines & Transmissions

IPA launches Alpha Mutt with ABS, tablet
Connect with us