At Prime Inc., success is driven by dedication to supporting drivers 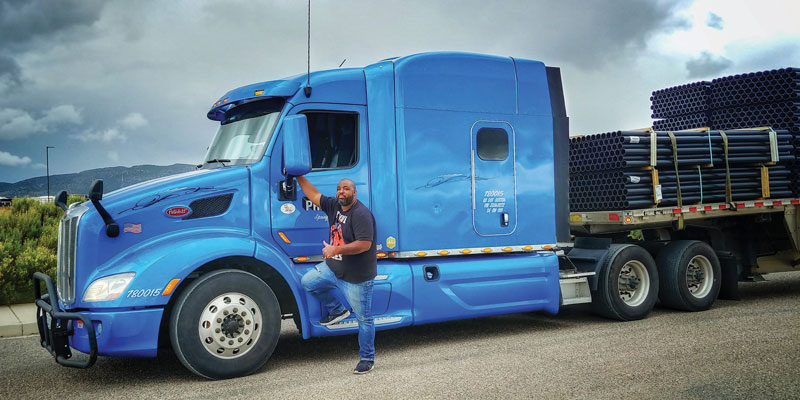 It shouldn’t be surprising that Prime Inc. has always been a driver-focused trucking company. Robert Low started the operation in 1970 with a single truck, with the then-19-year old behind the wheel as the company’s first driver. Today, he’s still at the helm as the carrier‘s president.

Prime, based in Springfield, Mo., now fields a fleet of more than 6,600 tractors and nearly 14,000 trailers. Its primary business is hauling refrigerated freight with more than 11,000 reefers, and it has sizable flatbed, tanker and intermodal divisions as well.

While Prime has grown considerably, across all of its operations it remains focused on drivers. Company drivers make up 30% of its driving force along with dedicated independent contractors. Most owner-operators at Prime take advantage of the Success Leasing program, which provides trucks and access to maintenance, fuel purchasing and other services.

Independent drivers at Prime also have a purchase option at the end of a typical three-year lease. Regardless, for its company-owned and leased equipment, the carrier adheres to about a three-year trade cycle. The current fleet averages 3.25 years before the equipment is sold through Pedigree Truck & Trailer Sales, although some units are kept longer on short-term leases to meet immediate freight hauling needs.

“Independent contractors who lease from us and company drivers operate the same equipment,” says Andrew Martin, the fleet’s leasing manager. “For the entire fleet, we make specification choices based on upfront, operating, repair and downtime costs, as well as residual values.

“Fuel economy and safety are very important to us, so we’re always looking at new technologies,” Martin continues. “Prime was actually one of the industry’s first adopters of collision avoidance and stability control systems.

“Driver preferences carry a lot of weight in our specification choices as well,” Martin adds. “Our specs include premium interiors and convenience items like APUs and power inverters. Owner-operators who lease trucks can also order options and amenities.”

Prime specifications are passed along to the Pedigree Truck & Trailer Sales division, which has a constant revolving inventory of equipment. “Our philosophy and maintenance program on the fleet side results in true quality, pre-owned equipment that other fleets want and need to help them be profitable,” Martin says. “It took several years to build the programs, but now, we have a team within our Pedigree division that is dedicated to identifying equipment that is ready to be sold, coordinating equipment to go through the through the maintenance shops at Prime to be prepared for sale, and then selling the equipment in the secondary market.”

In the Prime fleet are several makes and models, including Freightliner Cascadia Evolution and New Cascadia, Peterbilt Model 579 and International LT Series tractors. Among the newest models are Peterbilt Model 579 UltraLoft tractors added earlier this year.

“We were already familiar with the Model 579 and we run a lot of teams, so the added room in the high roof UltraLoft gives drivers upper and lower bunks and space for items like large microwaves and 32-in. TVs,” Martin notes. “Our drivers tell us that they use every inch of space in the sleeper so the largest models available are important to them.”

Late-model, premium equipment is one of the reasons, along with other driver-centric programs, that Prime has not been as affected by the driver shortage as other trucking companies, notes Andrea Mueller, Prime’s media and on-boarding manager. “We have several driver programs aimed at recruitment and retention because we know how critical and important our drivers are to our company,” she says. “We credit those offerings and our reputation for a large part of our success.”

Prime offers a choice of truck driving jobs in its refrigerated, tanker, intermodal and flatbed divisions. Traditional over-the-road single and team drivers are out three to four weeks at a time while dedicated drivers based at several facilities operate within a 300-mile radius and enjoy weekly or more frequent home time. Drivers take their truck home with them or to a local safe place to park in their hometown when taking time off.

“We also believe our Prime Training Program has benefited gives us the ability to bring in drivers with any level of experience and train them to run in any of our divisions,” Mueller says. “For example, we have training programs to help new drivers earn their Class A CDL and programs for drivers with their CDL but less than six months of recent experience.

“All of our trainers are current, experienced drivers in our fleet,” Mueller explains. “We feel the best way to train new drivers is by empowering our best drivers to pass on their knowledge and skills.

“Prime provides 24/7/365 live support to our drivers,” Mueller continues. “We also have a Driver Advisory Board who meet with some of Prime’s management team, including the owner of Prime, three times per year to address operations, safety, maintenance and industry concerns. All drivers have direct access to the board members so their feedback is heard. Many new initiatives and changes have come directly from the board.”

Other driver initiatives at Prime include the Good Dads program, which helps fathers communicate with their children and manage their careers as over-the-road drivers. For female drivers, there is the Highway Diamonds program, which offers support and initiatives to help reduce the challenges faced by women in the transportation industry. “We’re proud to have nearly 14% of our fleet composed of women drivers, more than double the national average,” Mueller relates.

Prime also rewards drivers who operate without a preventable accident after six months and one year, and then annually. In addition, its Millionaires program recognizes drivers who have driven at least one million miles without a preventable accident. Qualifying drivers receive an invitation to the annual Night of the Millionaires Banquet, which honors and celebrates members of the exclusive club, and they receive a personalized plaque, which is displayed in one of Prime’s three main terminals.