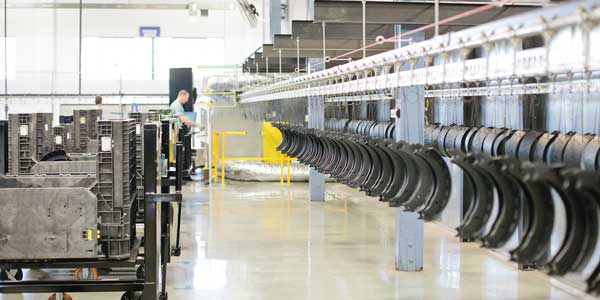 Bendix Commercial Vehicle Systems is offering a remanufactured brake shoe with the same friction and coating specs on its original equipment (OE) brake shoe, as well as an extended, five-year warranty against rust jacking. The warranty matches that which Bendix offers on its OE shoes. To help vehicle operators maintain performance of RSD-equipped vehicles (those built after 2011), Bendix offers both original equipment and aftermarket RSD-certified friction options. The company’s newest reman brake shoe combines Bendix OE friction with the same E-coat originally spec’ed only on Bendix OE shoes.

The brake shoe’s coating is engineered to protect against rust jacking, and comes with a five-year warranty. Rust jacking occurs when rust builds up on the steel beneath the brake lining and exerts upward pressure on the friction material, eventually causing it to crack. Although rust jacking can occur year-round, the combination of wet roads, temperature swings, and chemical de-icers—such as road salt or chemical compounds (for example, magnesium chloride and calcium chloride)—makes winter conditions ideal for corrosion to take hold on a brake shoe. For this reason, rust jacking is most prevalent in regions with cold-weather climates, Bendix said.

Bendix produces reman brake shoes at its 74,000-sq.-ft. Huntington, Ind., plant. The facility handles the complete salvage, coining, and assembly processes that make up start-to-finish brake shoe remanufacturing. Bendix significantly increased the capabilities and capacity of its Brake Shoe Remanufacturing Center in 2014. According to Bendix, the combination of Bendix coating, along with coining and high flexural strength friction that resists cracking, adds even more rust jacking protection.