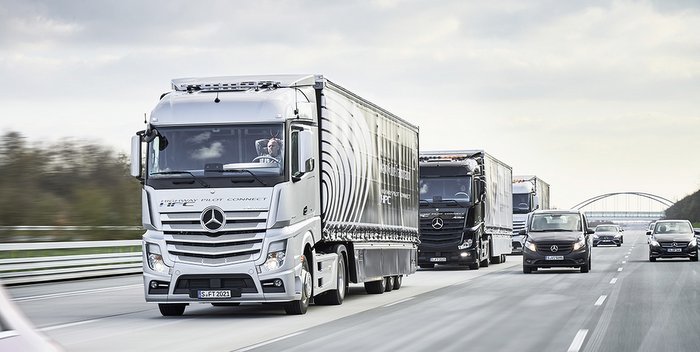 The basis of Highway Pilot Connect is vehicle-to-vehicle (V2V) connection and precise awareness of the surroundings that enables platoons of up to three trucks to operate in autonomous mode. The vehicles are equipped with both linear and lateral guidance systems. Although they are connected to each other as a platoon for a specific route, they can each be operated independently as autonomously driving trucks.

Networking between vehicles is made possible by an onboard telematics platform. This communicates using WLAN standard IEEE 802.11p, which is used only for automotive V2V applications. While the Highway Pilot drives semi-autonomously and is not networked with other vehicles, Highway Pilot Connect communicates with other trucks and the infrastructure. It uses a combination of a radio processor and a dual multiband HF transmitter/receiver. This means that information critical to safety, such as recognizing emergency braking when it occurs, can be transferred within 0.1 seconds.

The system also includes a three-dimensional high digital map. This means that the truck is always fully aware of the road’s course and topography. In addition the digital map and the information from multisensor fusion are used to determine the truck’s position. The driver also receives information about the status of the platoon and the traffic situation through a monitor in the instrument panel.

The driver receives information about the status of the platoon and the traffic situation via an 8-in. monitor in the instrument panel. This displays route information as well as the vehicle’s own position within the platoon as a map graphic. Each driver can see the current number of platoon members and his position within the group. In addition the individual drivers are always kept aware of the traffic situation. A camera in the lead vehicle records the driving situation ahead of the truck. Its images are transferred to all the vehicles in the convoy by WLAN, and shown on each monitor.

Using a seat occupancy sensor, a seat belt buckle and hands-on detection, Highway Pilot Connect checks whether the driver is in his seat and able to intervene if necessary.

Daimler’s aim was to show the additional potential of platooning without compromising safety, trucks can drive in convoy on motorways at close distances. Platooning reduces fuel consumption and therefore CO2 emissions, while also reducing the increasingly congested traffic space requirement. Highway Pilot Connect shows platooning as an important added component of autonomous driving, based on the networking of several trucks. Demonstrations on public roads have already shown that Highway Pilot Connect is not a far-off vision; it is a technical reality, the company pointed out.

Advertisement
In this article:Daimler Trucks

Infographic: Major differences in miles between breakdowns between best-in-class fleets and the industry average

Five truck trend takeaways from May