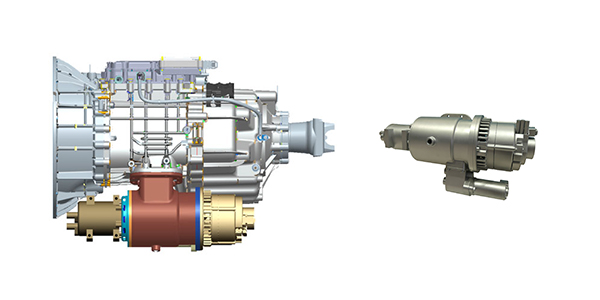 Eaton has announced it is developing a 48-volt mild hybrid electrically regenerative accessory drive. The system, which includes an inverter and a power takeoff assembly (PTO) with an electric motor and integrated AC compressor, features a 48-volt motor that charges the vehicle’s batteries, can run the air conditioner (AC), and replace the alternator in linehaul commercial vehicles.

“The 48-volt mild hybrid redefines traditional belt-mounted accessories to save fuel and reduce emissions in several ways. Enabling start/stop and engine-off coasting saves fuel while driving,” said Jeffrey Lowinger, Eaton’s president of eMobility. “A regenerative system captures energy while driving and is used to keep the sleeper cab comfortable overnight without idling the engine. We think it is an efficient and cost-effective solution for our linehaul customers.”

According to Eaton, the system can run the AC system in the sleeper cab overnight without having to start the engine. When the vehicle is in motion, with the engine either on or off, the drive shaft is spinning the gears in the transmission, which turn an electric motor that generates electricity. That energy can be used to cover the electric load demands of the vehicle or it can be stored in the batteries. As an integrated solution, the 48-volt mild hybrid drive is a flexible system, able to provide 48 volts and separately either 24 or 12 volts to power the electrical loads of the vehicle, including engine and transmission controllers, cab power and trailers.

The 48-volt mild hybrid system operates in various modes, including:

According to the company, the system improves fuel efficiency by mounting the accessories on the transmission, delivering up to 2% annual fuel savings compared with a baseline truck equipped with an Endurant transmission from Eaton Cummins Automated Transmission Technologies, by eliminating the alternator and implementing engine-off coasting.

Additionally, the system’s air-cooled package eliminates the need for liquid cooling lines, which reduces cable and harnessing costs and weight by up to 50 lbs. in a linehaul truck. The generator is located next to the batteries instead of on the engine, further reducing cables and harnesses, while replacing the starter eliminates two high-power cables and combining the motor drive and DC converter negates the need for two 48-volt harnesses, the company added. The system provides a U.S. greenhouse gas credit up to 7%.

Advertisement
In this article:Eaton, Electrical & Lighting