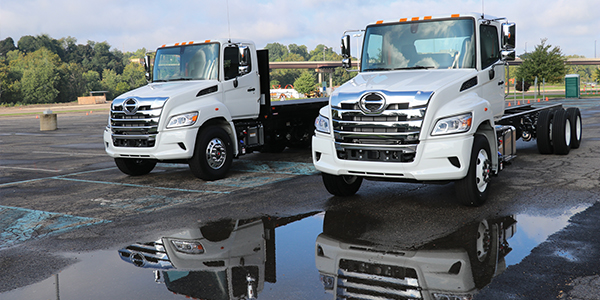 For Hino Trucks, coming into the Class 8 market was a decision that was not made lightly.

“There haven’t been a lot of new players in the Class 8 market in a long time; there’s a well-established product offering in the marketplace today,” said Glenn Ellis, senior vice president of customer experience for Hino Trucks, a Toyota Group company. “The biggest challenge is finding the fit for another product in the marketplace.  We have seen great success, especially in Class 6 and Class 7. Customers are looking for an alternative to what’s in the marketplace today, and with the success we’ve seen in our low cost of operation in the Class 6-7, we feel that Hino can have that same proposal in the Class 8 market.”

Hino Trucks pulled the curtain off its Class 8 trucks, dubbed the XL Series, at the Work Truck Show earlier this year. The XL7 and XL8 trucks are powered by Hino’s existing A09 engine, which has been in production for more than a decade. The A09 features a range of 300-360 HP and up to 1,150 lb./ft. of torque. Several straight truck and tractor configurations will be offered, with GVWR ranging from 33,000 to 60,000 lbs., and GCWR up to 66,000 lbs.

“We’re building anywhere from 170,000 to 190,000 engines a year that go into our products around the world,” Ellis pointed out. “Within the Class 4 through 7 market that we’re offering today, our engines are well-known for their durability, reliability, fuel economy and resell value. One of the big bullet points of our A09 engine is that this engine will actually have a million mile B10 life, which is about double of some of the other 9-liter engines in the marketplace today.” 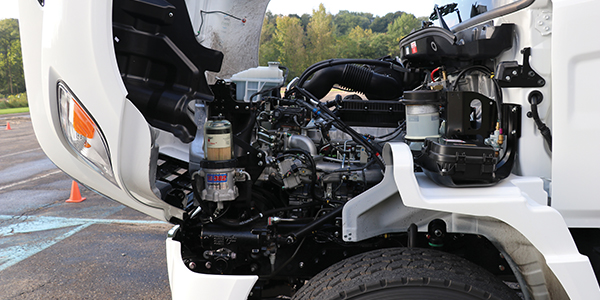 The A09 sports all the latest engine technology including variable geometry turbos and high-pressure common rail fuel systems, and it will utilize the same aftertreatment system that Hino currently employs. In the way of transmissions, the Hino XL Series will come standard with an Allison 3000 Series automatic transmission, with the available options of either a 10- or 12-speed Eaton manual transmission. Dana will be supplying the axles. The equipment spec falls within the lower end of the Class 8 weight range—and that is driven by the applications that Hino is aiming to impact.

“We see regional haul operations growing, as well as last mile delivery, which is being driven by e-commerce,” Ellis said.” I think that the overall Class 8 has moved from 15 to 13 liters, predominantly, and there’s a growing segment within the 9-liter engine spec. From a vocational standpoint, the XL Series also rounds out our Class 7 product, which tops out at 260 HP. Having the 9-liter Hino A09 engine in our XL series will complement our Class 7 and get us into that smaller application of Class 8 tandem axles.” 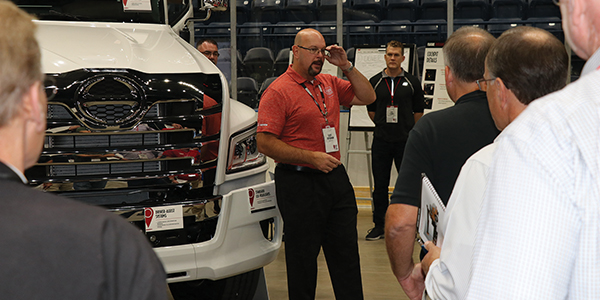 Regional haul. Urban delivery. Construction and municipality applications. These are applications that have been growing over the past several years and, this year, are exploding with potential. Hino aims to capitalize on those application trends.

“The market is changing,” Ellis said. “I don’t know if there’s one trend that’s driving it. We see many trends: We see some of the heavier Class 8 fleets getting into much smaller trucks. In the past two to three years, Hino has sold approximately 300 to 350 Class 4 and 5 cab over trucks to traditional large Class 8 customers for last mile delivery.

“I think that in the past, larger fleets have tried to have one type of truck that meets multiple applications,” he continued, “and I think they’re starting to understand that within the different applications and the different businesses they’re running, it’s best to have a product that fits that application in the most efficient manner.” 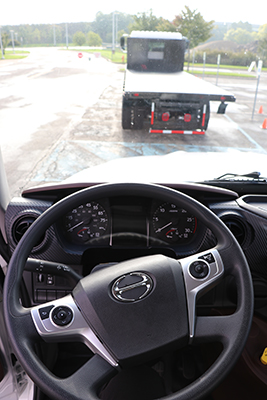 Within the Class 4 cab-over market, Hino estimates that it has captured approximately 20% of that market share, along with owning 30% to 32% of the Class 5 cab-over market. Ellis said that the Class 6 market has been Hino’s bread and butter, with a 16% market share. Today, with larger fleets already familiar with the Hino brand through its Class 4 to 7 offering and its smaller Class customer foundation looking to expand into larger operations, Ellis is confident that Hino’s entry into the Class 8 market will have heads turning within the market.

“Right now, we’re in the process of rolling out a hundred demo trucks; a lot of those are going to potential new customers,” Ellis said, noting that a good portion of those are 4×2 tractors for regional haul, urban delivery applications. “We’re taking a one-on-one approach. We’ve worked with the customers, and we’ve delivered a number of those demos to end-users already. The plan is that we’ll bring the product in and do a complete walk-around of the product and driver training. Throughout the demo period, we’re constantly checking in to see how the customer is doing and answering any questions they may have. Early next year, we’ll be hitting a lot of vocational shows with the XL Series in different applications.”

Dealers will be taking XL Series orders in early November and full production will start in the first quarter of 2019.

This week marks an important milestone for trucking in California, where those operating most commercial diesel trucks must have the newest generation of advanced diesel technology under the hood.