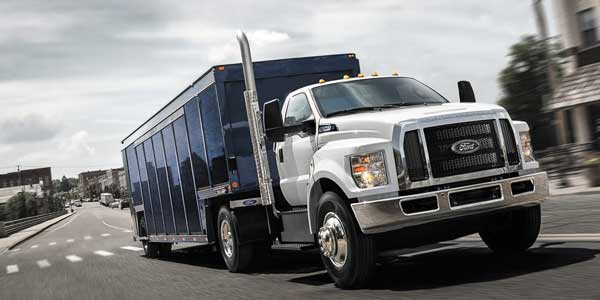 If you’re a fleet operating Class 6 and 7 trucks and tractors—and as the well-known commercial slogan suggests, you haven’t driven a Ford lately—the manufacturer says you’re missing out.

“We’re seeing growing interest in our Class 6 and 7 truck and tractor models from beverage, hauling and other types of fleets,” said Kevin Koester, Ford’s medium-duty truck and Super Duty fleet marketing manager. “Giving our customers the choice of two exclusive powertrains, available across all body styles and designed specifically for the unique needs of the vocational truck market, has really helped drive up sales of our new trucks.”

It was about one year ago when Ford unveiled the Power Stroke V8 diesel for its F-650 and F-750 medium-duty truck line. The engine, according to the manufacturer, has a B10 design life of at least a half-million miles. What that means, the company explained, is that 90% of the Power Stroke diesels are expected to go farther than 500,000 miles without requiring a major service that involves the removal of cylinder heads or dropping the oil pan to reach internal components.

Ford-built TorqShift HD six-speed automatic transmissions are mated to both gasoline and diesel engines in the F-650 and F-750 trucks, and according to the OEM, vocational fleets are especially interested in the TorqShift HD’s available Live-Drive Power Takeoff Provision. With the option, the PowerStroke diesel can crank out 300 lb./ft. of stationary torque to provide power to operate equipment on a job site.

Also available on Ford medium-duty 2017 models is mobile mode, a design that uses the engine crankshaft to provide 200 lb./ft. of power for equipment such as salt spreaders. Diesel models can also accommodate split-shaft PTO applications.

Ford’s sales growth in the Class 6-7 market came quickly after the OEM began building the redesigned F-650 and F-750 trucks at its Ohio assembly plant in August 2015. Ford had shifted production to the Cleveland area manufacturing facility from Mexico and invested $200 million in the plant. The Ohio assembly plant employs more than 1,650 people who build Ford E-Series cutaway vans and stripped chassis and F-350, F-450 and F-550 Super Duty chassis cabs, in addition to the F-650 and F-750. Ford’s investment in the Ohio assembly plant is part of $1.6 billion the company is putting into that facility and its Livonia Transmission plant in Michigan.

Overall, the OEM has committed to investing $9 billion and to creating or retaining 8,500 hourly jobs in its U.S. facilities in the next four years. In the previous five years, Ford invested $12 billion in its U.S. plants and created nearly 28,000 U.S. jobs.

Released last fall, Ford’s medium-duty Class 6 and 7 sales numbers for its F-650 and F-750 truck and tractor models were 59% higher year-over-year through August 2016. In the first eight months of 2016, the manufacturer sold more of the top end models in its F-Series lineup to fleets than in all of 2015. When were the next best year-to-date sales totals for the OEM’s largest models? Those came nearly 20 years earlier, in August 1997.

Advertisement
In this article:Truck OEMs

Medium-duty success: Ford is seeing growth in the Class 6 & 7 markets