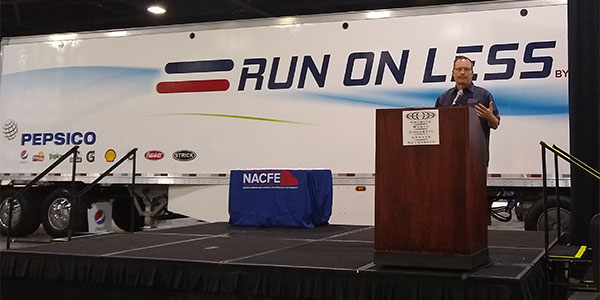 The trucks and drivers in Run on Less Regional, a freight efficiency demonstration conducted by the North American Council for Freight Efficiency (NACFE), hit an average 8.3 miles per gallon (28 L/100km) for the three-week event, an improvement over the national average of 6.0 MPG, NACFE reported.

Click here to read all of our NACV 2019 Coverage.

NACFE chose to focus this year’s Run on regional haul operations to demonstrate that with the right investment in technology and with skilled drivers it is possible to achieve MPGs far above those of the average fleet. Over the course of Run on Less, NACFE also discovered that:

• High efficiency requires a commitment from both fleet leadership and drivers.

• Big data and connectivity can be used to further optimize for each route.

• Diversity in duty cycles makes it essential that fleet managers understand the nuances of their business so they can spec vehicles properly and coach drivers in efficient driving techniques.

• The expansion of regional haul will help attract and retain drivers as drivers get home on a more regular basis.

• Because of its return-to-base operation, regional haul is ideal for alternative-fuel vehicles, especially battery electric trucks.

The 10 trucks operated within 300 miles of their home base in hub and spoke, dedicated and multi-stop routes. They faced a variety of challenges including traffic congestion, construction, operating in urban environments, and traveling secondary roads.

Some of the trucks operated in two shifts per day, possibly in differing duty cycles, and there was one natural gas truck, which has lower inherent efficiency. NACFE also learned that because of the diversity of duty cycles, the equipment has a very utilitarian design, which challenges optimization. Despite those challenges, using commercially available technologies these trucks demonstrated that it is possible to operate in a fuel-efficient manner in real-world regional haul operations.

Throughout the run, the three Freightliners, two Internationals, two Kenworths, one Peterbilt, and two Volvos, piloted by drivers Louis Scaruffi, Mark Casey, Glen Williams, Dustin Whitener, Rita Bare, Lou Martinez, Travis Lauer, Michael Tam, Beau White, and Darin Salgado, were monitored by devices installed by Geotab and by data loggers from the National Renewable Energy Laboratory, both event sponsors. Speed, load, elevation changes, number of stops, and weather were monitored during the three weeks of the Run. Shell was title sponsor for the Run, and a host of other companies were event sponsors and supporters.