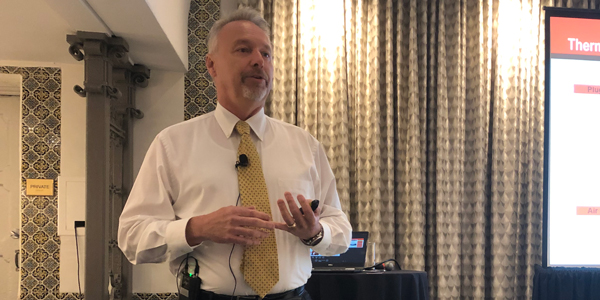 Pressure Systems International (P.S.I.) and Meritor recently invited fleet and service managers and members of the media to its annual fleet technology event to discuss the benefits of their Meritor Tire Inflation System (MTIS) and show how adopting this technology can benefit fleets preparing to face rising fuel costs and upcoming greenhouse gas emissions legislation.

Pressure Systems International (P.S.I.) and Meritor recently invited fleet and service managers and members of the media to its annual fleet technology event to discuss the benefits of their Meritor Tire Inflation System (MTIS) and show how adopting this technology can benefit fleets preparing to face rising fuel costs and upcoming greenhouse gas emissions legislation.

Sharkey said while the regulations will likely increase the adoption rate of the MTIS, P.S.I. and Meritor do not back the legislation.

“As we sit here, I can tell you that we don’t support the legislation. The adoption rate of this system is already very high. We were happy with the way the adoption rate was going,” Sharkey said. “We want customers to understand the value of the investment and how they get paid back. We don’t want it forced down anyone’s throat.”

Because MTIS has also been shown to help fleets curb fuel costs, Dave Schaller, industry engagement director for the North American Council for Freight Efficiency (NACFE) also posed a warning regarding a possible cost increase in diesel fuel due to a change in maritime law.

The new rules, mandated by the United Nations International Maritime Organization, will force large ships to switch from high-sulfur, sludge-like fuels to lower-sulfur fuel or to find a technological solution by Jan. 1, 2020.

“The good news is in 2020 the engine emissions nightmare isn’t ours, it’s the shipping industry’s,” Schaller said. “They have about four or five different ways they can go, but the majority of them will start burning something that is very, very similar to our ultra-low-sulfur diesel (ULSD). And those, boys and girls, have huge fuel tanks.

“So they’re going to start sucking up what’s coming out of the refineries to use in the ocean-going part of the world next year,” he continued. “Right now it’s tough to say… we’re looking at probably a 25-50 cent [per gallon] increase in fuel prices at the end of this year, beginning of next year, just due to an emissions change that isn’t even ours.”

Schaller recommended that fleets pay special attention to how they are spec’ing their equipment to help combat these costs.

Following the presentation, guests were invited to tour P.S.I.’s San Antonio plant, where a large banner boasting that one million auto-inflation systems had been sold hanging on the wall was dropped to reveal a new banner showing the company’s new achievement of 1.5 million units sold.

“Tires are a challenge, and they’re also an opportunity. In many cases, many fleets certainly view tires as a great way to save money, to improve performance,” Sharkey said. “And really, at the end of the day, just like fuel, you can’t finish a run without air in your tires, you can’t finish it without fuel in your tank; they’re just as important.”

Sharkey said that since P.S.I. and Meritor inked their partnership in 1998, close to 70% of all for-hire and private fleets have chosen MTIS as their preferred tire inflation system.

“Tire inflation is and has been a discretionary product. It’s an option,” Sharkey said. “Meritor really provided that great fit for us. Really, all of our customers have the best of both worlds. You have the product focus of P.S.I., which is singularly focused on tire solutions, and you have the world-class support of Meritor, put together.”