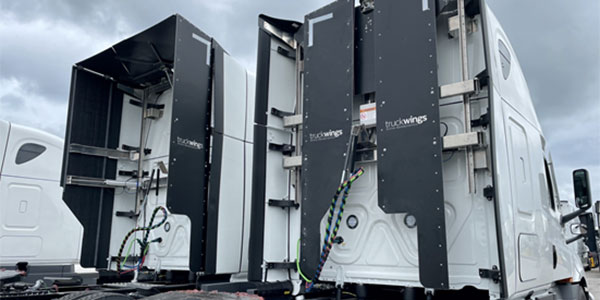 Part of Ryder’s mission is to regularly explore and evaluate new vehicles, new technologies, and early-stage development products that could directly benefit customers by improving fuel economy, enhancing safety, and reducing environmental impacts and long-term operating costs. Fuel is one of the biggest and most volatile costs for Ryder’s customers (especially right now), driving interest in new technologies that have the potential to improve fuel economy in existing fleets and reduce operating costs. According to a 2019 study by the American Transportation Research Institute (ATRI), fuel accounts for 24%, on average, of the total operational costs for trucking companies.

Customers are also seeking greener, more eco-friendly solutions. The challenge is identifying new technologies and rigorously testing them under realistic road conditions before rolling them out fleetwide and bringing them to customers. To address this challenge, Ryder evaluated TruckWings, an active aerodynamic device made by TruckLabs. TruckWings automatically deploys and closes the gap between the cab and trailer to reduce drag, improve handling, and save fuel. Improved fuel efficiency also means lower greenhouse gas emissions.

TruckLabs has done extensive testing and demonstration of the technology with other fleets, but Ryder wanted further validation of TruckWings’ promoted fuel savings. The company has a dedicated team of internal
resources devoted to a rigorous approach to new-product testing.

TruckLabs worked with Ryder to design a robust on-road test to quantify the benefits of TruckWings. The test would compare the relative performance of a truck before and after TruckWings was installed. The evaluation was based on industry recommended practices for fuel-economy tests developed by members of the Technology & Maintenance Council of the American Trucking Associations and adopted by the Society of Automotive Engineers.

The companies chose 60 identical trucks across five Ryder locations in the Southwest region to minimize the impact of changing drivers and routes. To balance variables such as temperature and fuel quality, the trucks were randomly split into control and test groups per site.