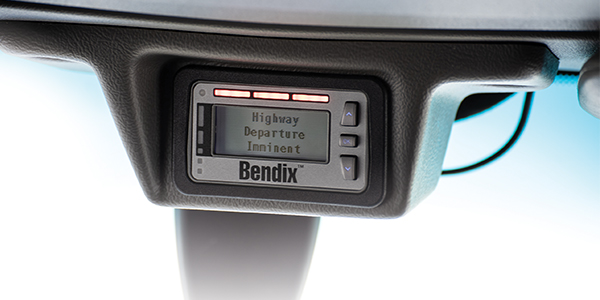 When we talk about automated vehicles, there’s a temptation to place the conversation far off in the future, but it’s worth remembering that the bones of the automated future are already on the road in today’s trucks. Fred Andersky, director of customer solutions for the controls group with Bendix, describes today’s advanced safety systems as “stepping stones” on the road to automated trucks.

“There are two approaches to get to the autonomous future: direct to Level 4 and 5 [of autonomy], or through a stepping stone approach to automation that builds on advanced driver assistance systems,” Andersky said. He then made it clear that the second approach is the one taken by Bendix, while adding that both approaches are going to coexist “for the foreseeable future.”

“The second approach builds the future of autonomy using field-proven approaches to deliver increasingly automated applications while still keeping the driver behind the wheel,” Andersky said. “This approach also envisions driver evolution from a focus on driving to a focus on other areas to support the fleet’s efforts, like customer relations, loading and unloading the truck, backup to automation, etc.”

Some of those stepping stones Andersky alluded to were announced this month, as Bendix rolled out the new generation of its Wingman Fusion advanced safety system and its BlindSpotter technology, which now features the ability to integrate with Wingman Fusion.

According to the company, BlindSpotter uses a new side-mounted radar unit, to alert drivers to vehicles or objects in adjacent lanes. It also now includes the ability to connect to the vehicle’s J1939 CAN (controller area network). The company says that this new radar system and CAN connectivity can see up to 2.5 times farther in each direction than the radar in the previous version of BlindSpotter.

One of the most interesting bullet points in the rundown of Wingman Fusion upgrades is that these are software upgrades—not a hardware change. Fleets using the current generation of Wingman Fusion will be able to upgrade some of the features to the next generation. The upgraded system is available now and will be offered by several major truck OEMs—Peterbilt, Kenworth, Volvo, Mack and International, specifically—in 2019.

Some of the new features introduced include:

❷ Active Cruise with Braking (ACB) Stop & Driver Go. “This extends the operation below the normal cruise control speed range all the way to a vehicle stop,” explained Andy Pilkington, Bendix product manager for advanced driver assistance systems (ADAS), during a press conference announcing the upgraded system. “Many fender-bender-type accidents happen during low speed driving conditions, and this feature allows our active braking system to stay engaged and help drivers mitigate those low-speed traffic jam accidents. Our system will bring the vehicle to a full stop, and hold the vehicle at stop for several seconds. When traffic starts to move again, the driver can authorize the go function by briefly pressing the accelerator pedal, and the vehicle from there will automatically move with the speed of traffic. This assists the driver in stop-and-go traffic situations.”
Looking toward the future, Pilkington added that this feature builds toward an auto-go feature that will be necessary for successful automated heavy-duty trucks.

❸ ACB Auto-Resume, in which the adaptive cruise system will auto-resume after a braking event. Bendix says this will lessen fatigue on the driver.

❹ Multi-lane emergency braking. “In some collision scenarios, drivers will evade to another lane because there may be more room in that direction,” Pilkington said. “Using the camera, we can detect traffic in these adjacent lanes, and continue braking through the lane change, as opposed to today’s systems, which need to re-detect traffic in the new lane and start a new event.”

Additionally, the system can now reduce vehicle speed by up to 50 MPH in collision scenarios—a 40% increase over what was previously possible.

Each of these upgrades, collectively, represent the “stepping stones” Andersky referred to—small, incremental improvements that will one day get us where we’re going. It’s the same with any other technology: even the biggest technological advancements don’t just show up out of the blue one day—they’re the result of years of work and of steady improvements.

Stepping stones: Bendix travels further down the road toward the automated future