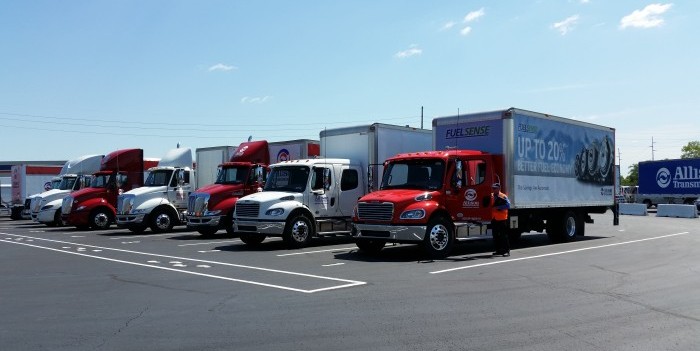 Allison Transmission is one of the biggest names in the automotive industry, but not one that’s often associated with Class 8 trucks. Automatic transmissions like those at Allison simply haven’t had much of a place at the table in a world dominated by manual (and lately, automated manual) transmissions.

This is a perception that Allison hopes to change, and a market it hopes to make a big impact on in the future. The company recently introduced the TC10 automatic transmission, which is optimized for city routes and those with a significant amount of stopping and starting—it conserves fuel for short- and mixed-duty cycles.

According to Allison Chairman, President and Chief Executive Officer Larry Dewey, the company wants the TC10 to be a significant improvement for short-haul routes while tackling over-the-road routes. “It’s a little like winning the first half of the football game and then tying the second,” says Dewey. “Overall, it still means you come out ahead.”

Fuel economy is the name of the game for Allison. Dewey says that despite the recent decline in diesel prices, “at any price, fuel is still a significant operating cost for fleets,” and one Allison’s transmissions are built to reduce.

“From a fleet perspective, [automatics] allow you to expand the pool of drivers, because now you don’t need an expert at shifting a clutch, and the training period is significantly reduced.”

As of now, Navistar is the only OEM that offers the automatic TC10 transmission, but Dewey hints that something bigger is on the horizon, saying that Allison is in “very active negotiations” with other OEMs, both in North America and abroad.

Dewey concedes that there are still plenty of obstacles to automatic transmissions permeating the Class 8 market, but he encourages fleets to give it a shot:

“What I tell our sales guys to say to fleets is, ‘What do we have to do to get one or two of these in your fleet?’ Then you can see in your operation whether or not you’re getting the value. If you’re not, we haven’t earned your business. But hopefully you’ll see the value in it.”