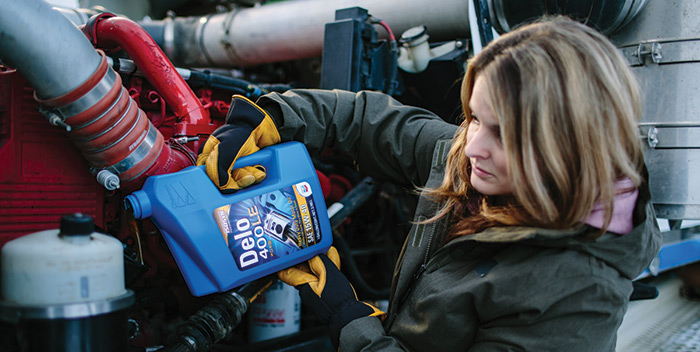 When asked about an accidental oil top-off that would mix oils, Badal responds, “There certainly are concerns among fleets, and that’s why we constantly stress fleet managers to check with their OEMs for what to implement. The impact of improper oil usage depends on a number of circumstances, but it is unlikely that a one-time use would cause immediate damage or failure. Depending on how much is mixed with either API CJ-4 or CK-4 product, there will be limited impact if it is accidentally topped off (one gallon or less is added). However, more issues may arise if a full oil change to FA-4 product occurs in an older engine.” An operator of an older diesel engine may see derating issues, oil pressure issues, and potentially increased wear, but this also depends on the age of the engine/EPA model version.

“Topping off an engine with CK-4 / FA-4 when the other was called for would not result in anything catastrophic as they both will have passed the same category performance levels,” Negri says. “One must always be mindful of maintaining the correct viscosity, though, for proper engine protection.”

“CK-4 engine oils are miscible with CJ-4, but it’s important to minimize mixing to ensure the benefits of CK-4. FA-4 engine oils are miscible with CJ-4 and CK-4,” Citgo’s Betner says, “but FA-4 is only recommended in future compliant engines and is not currently backward compatible. It is best to minimize any mixing of a FA-4 engine oil to ensure OEM warranty support.” As always, check your owner’s manual for proper lubricant recommendation.

Lubrizol’s Basar agrees. “The new API CK-4 engine oils are fully compatible with all existing engines, and simply better than today¹s API CJ-4 equivalent,” he says. “When it comes to the new API FA-4 engine oils, these must only be used in engines, which the OEMs have determined can use these oils, and in turn benefit from the fuel economy benefits they can offer. OEMs must determine on a model-by-model basis whether API FA-4 oils will function well in their older engines. They are currently undertaking to do this in extensive field testing, and are making determinations as to how far backward compatible these oils are in their platforms.

“Our advice is the first resource to be consulted should always be the maintenance booklet,” he continues. “However, for existing vehicles out there, different OEMs may have differing policies on whether existing vehicles will now also be API FA-4 compatible.”

If fleets are unsure they should speak to their oil marketer, or to their OEM contact if they have one, to determine whether their fleet can take advantage of the newer, more fuel-efficient API FA-4 engine oils.

Following a recent announcement from the EPA to vehicle manufacturers, new vehicles which are API FA-4 compatible will have to clearly state API FA-4 oils should be used on the oil filler cap. It will also state this in the service and maintenance manual. This will make it easier for maintenance teams to visually see which new vehicles should be using API FA-4 engine oils, together with any additional OEM approvals that may be relevant to the fleet.

“While 15W-40 engine oils will only be API CK-4, there will be 10W-XX and 5W-XX engine oils which can be both higher HTHS [API CK-4] or lower HTHS [API FA-4],” Lubrizol’s Basar says. “Look at the donut label on the back of the bottle, or in the oil marketers’ promotional materials to ensure the correct one is being used.”

The API CK-4 Service Symbol Donut follows same the format as previous categories; API FA-4 has a new design label with the top left hand side having a prominent FA-4 in contrasting colors [e.g. white on red, white on black, black on white, etc.]”

“Using the correct engine oil is critical to maximizing engine performance,” Shell’s Arcy says. “A CJ-4 oil in an engine that needs CK-4 could result in engine wear, performance issues and possible warranty concerns. CK-4 oils are designed to provide high temperature oxidation control, aeration control and improved shear stability compared to CJ-4. In addition, some 2017 API FA-4 oils will be an acceptable option. Engine manufacturers will determine which engines will use FA-4.” 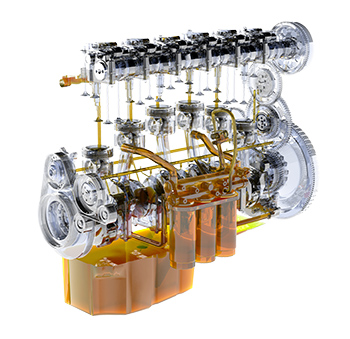 To ensure these new oils are proven to perform and protect from the day of the first license, a significant amount of engine and real-world testing has been taking place through the industry over the past few years. Lubrizol has been developing API CK-4 and FA-4 technology and formulations already with more than 50 million miles of accumulated real world service, in both on and off-road engines. This, according to Lubrizol, ensures real-world durability and performance, giving confidence of performance additives and polymer solutions within the lubricant from the first day the licensing comes into force.

“CK-4 oils are broadly applicable for on-highway and off-road applications, just like CJ-4 today, while FA-4 oils are specifically designed to accentuate the fuel economy characteristics of 2017 (and beyond) engine designs,” Phillips 66’s Negri highlights. “The engine manufacturers will determine back-serviceability of the FA-4 oils. However, it is worth noting that both FA-4 and CK-4 oils will be subject to the same durability testing. As always, fleet operators will need to evaluate their performance and maintenance goals, as well as the OEM’s recommendations, in order to determine the right mixes of products for their equipment.”