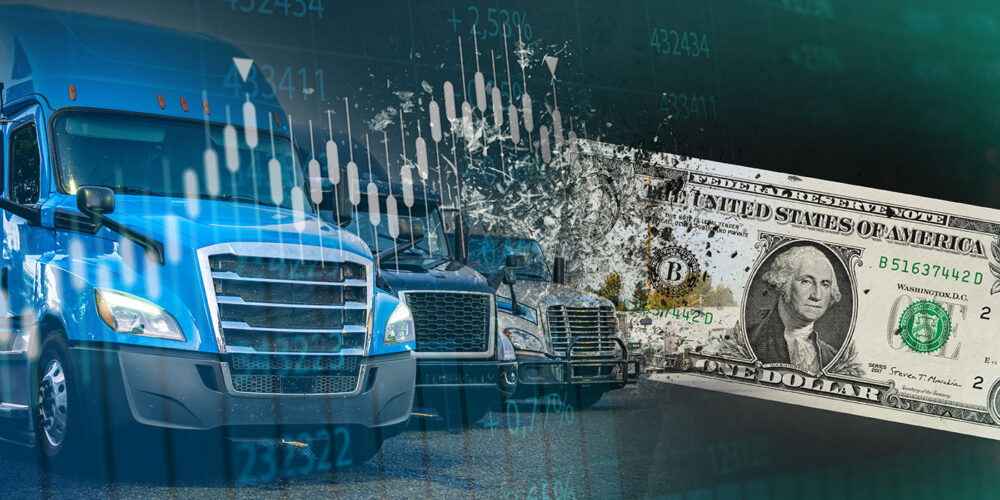 FTR threw its 2023 market prediction hat into the ring during a recent online press conference that discussed the findings of its State of Freight report, a comprehensive analysis of the current state of the transportation industry with a focus on the trucking and logistics sector. The report provides insights and data on key industry trends such as carrier capacity, fuel prices, and demand for transportation services. It also includes detailed forecasts and projections for the future with the aim of helping fleets plan for potential uncertainty in the transportation industry.

Let’s start with the elephant in the room—inflation. According to the Bureau of Labor Statistics, core inflation is cooling, but not disappearing. This is a trend expected to continue throughout the rest of 2023.

When it comes to personal savings rate, it is the lowest it has been since July 2005. In other words, the percent of disposable income continues to fall.

While job growth has slowed, it is still in a solid state as we make our way into the new year.

Regarding the state of the retail inventory-to-sales ratio, inventories are still limited but much less so compared to before.

Manufacturing still has some pent up demand as OEMs work to ease bottlenecks and increase production to meet the increased demand.

Looking closer into the world of international trade, import growth slowed throughout 2022 according to Port reports analyzed by FTR Intermodal Service.

Concerning California imports, the state suffered more than most port regions with an aggressive fall off of imported TEUs in mid-2022.

Regarding Southeast imports, imported TEUs showed a much slower and delayed dip in import traffic compared to other regions. This can likely be attributed to the fact that Southeast Asia is a major manufacturing hub for many industries such as electronics and textiles, and as a result, the demand for imported raw materials and components to sustain these industries remained relatively stable. However, it’s important to note that this slower dip in import traffic does not mean that the region was immune to the impacts of the pandemic, as many industries did see a decrease in demand and disruptions to supply chains.

Gulf coast imports continues to remain strong regarding imported TEU volume despite the challenges brought on by the ongoing pandemic. This can be attributed to a number of factors, including the region’s strategic location as a major hub for international trade, the presence of large ports such as Houston and New Orleans, and the strong demand for consumer goods and industrial products in the region. Additionally, many companies have been shifting their supply chains to the Gulf Coast in recent years, which has also contributed to the strong import volume in the region.

A net change in carrier population is clearly in decline, but still remains elevated in 2023.

How it impacts the trucking industry

When it comes to for-hire trucking jobs, payroll employment seems to be on the rise, indicating a positive trend in the industry. This can be attributed to a number of factors, including the continued growth in e-commerce and online shopping, which has led to an increase in demand for transportation services. Additionally, the ongoing economic recovery, and the reopening of businesses and industries that were shut down during the pandemic, has also contributed to the increase in demand for trucking services.

The number of new carriers remain far above “normal” regarding new trucking companies.

The number of companies losing their permission to operate (net revocations of authority) increased as the cost of diesel fuel went up and the prices for transporting goods (spot rates) decreased.

Regarding truck loadings outlook, loadings have flattened but not yet turned negative – yet.

The cost of diesel fuel has decreased slightly but it still remains much higher than it has been in the past. The changes in fuel cost have an impact on the types of trucks that are used to transport goods.

The rate of active use of large trucks (Class 8) is decreasing, but it is expected to remain above the levels it was in 2019.

When it comes to the total cost of transporting goods by truck (total truckload rates), it seems like the prices for transport on short notice (spot rates) are nearing the lowest point they can reach.