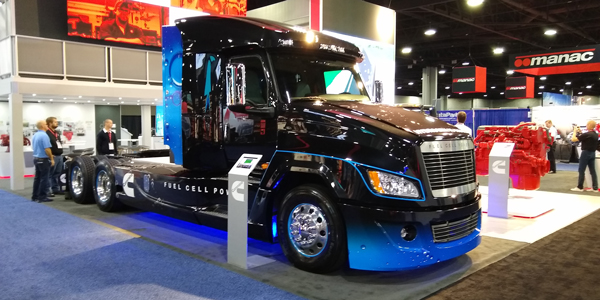 Cummins and Navistar announced that they will work together on the development of a Class 8 truck powered by hydrogen fuel cells. The project will be funded in part through an award from the U.S. Department of Energy’s (DOE) Office of Energy Efficiency and Renewable Energy (EERE) previously announced in August, as part of DOE’s “[email protected]” initiative to develop affordable hydrogen production, storage, distribution and use.

(Editor’s note: Pictured above is the fuel cell demo truck Cummins displayed in its booth during last year’s NACV. It is not representative of the planned collaboration.)

“This vehicle will feature our next generation fuel cell configuration and provides a springboard for us to advance our hydrogen technology for line haul trucks,” said Amy Davis, vice president and president of new power at Cummins.

The award is one of two DOE grants awarded to Cummins, totaling more than $7 million, and will aid in the development of an integrated fuel cell electric powertrain for heavy-duty trucks with operational performance and total cost of ownership that supports near-term, rapid and substantial penetration of the truck markets. This includes development of a solution that is highly manufacturable and scalable with a proven range of 300 miles or more and improved fuel economy over current heavy-duty trucks.

The powertrain will be integrated into an International RH Series and uses two HyPM HD90 power modules, made up of HD45 fuel cell stacks connected in series. Instead of having a single large fuel cell operate at a partial load, individual HD45 power modules can be turned on and off to provide adequate power at an efficient full load.

“Hydrogen offers great opportunity in the commercial vehicle sector and we’re proud to be part of the team working to develop a complete solution for customers,” said Darren Gosbee, vice president of engineering at Navistar.

The prototype fuel cell Class 8 truck will ultimately see a year-long field test. The truck will be integrated into Werner Enterprises’ fleet of more than 7,700 tractors and operated in real-world local and/or regional delivery operation out of Fontana, California.