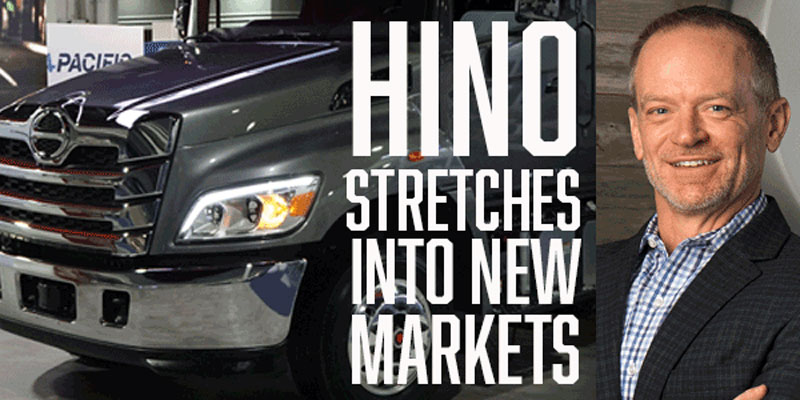 In the middle of the Hino Trucks booth at the North American Commercial Vehicle (NACV) Show sit several of the industry’s most unique offerings: the Hino XL and L Series extended and crew cab configurations. They’re beefy vocational haulers built for productivity and driver comfort. The rollout of Hino’s new XL Series provided the platform for the extended cab and crew cab configurations for both the XL and L Series—something Hino has looked to execute for a while.

“The extended cab and crew cab configurations are something we toyed with years ago,” explained Bob Petz, Hino Trucks’ senior vice president for vehicle and parts sales. “Our customers have asked for that since we have launched the conventional product. The biggest segment that we’re after is towing and recovery.” He pointed to the L Series extended cab with a flatbed. Within the XL and L Series, the 30-in. extended cab will have seating for five, while the 44-in. crew cab will have full-size doors, seat six passengers and provide the comfort of rear zone A/C and heat. “There are certain state regulations and contracts that require towing companies to have to have room for the family that’s being picked up on the side of the road or they don’t get the towing contract. We don’t play in those segments today; that’s just pure incremental volume that we will be able to go after.”

While the XL and L Series extended and crew cabs were certainly an eye-catcher, taking a walk around Hino’s expansive booth, you noticed how Hino has pulled together its entire Class 4-8 lineup. There’s a new streamlined nomenclature: M Series (Class 4/5) and L Series (Class 6/7) in addition to the XL Series (Class 7/8), each with larger cab configurations and a full suite of features adding safety, fresh designs, durability, flexibility and connectivity options. It signals a cohesive market strategy and plan of attack as Hino looks to expand its market share.

“The rebranding goes back years,” Bob recalled. “When we first launched the conventional product it made a lot of sense to combine the GVW and the engine size. With an 8-liter engine and 26,000 GVW, it was the 268. That’s as complicated as our nomenclature was at the time.

“As we expanded the product line we knew that we would probably have to change. We got away with it when we launched the cabover in 2012, but once we introduced the XL Series into Class 7 and 8 segments late last year, putting the GVW into the model structure did not make any sense when we offer so many variations.”

“We’ve had demos in operation since early 2019, and we’ve had a slow, controlled launch,” he said. “We have a team of engineers that go through every response to a survey that we send out to each customer that has touched the truck. We have received a lot of validation on our design. When you hop inside the truck, it’s not truck-like. It’s more automotive and that was something we were always driving from our side to our engineering side. Some of that has to do with our parent company, Toyota, and who we are as an entity.”

Easy operation, drivability and driver-friendly features all fall in line with the industry’s push to keep drivers happy and in fleets’ seats. That goes double for the latest advanced driver assistance safety systems that are offered by the entire Hino lineup.

“I think that fleets feel a responsibility to keep their drivers safe,” Bob said. “And we’re all socially responsible to keep those we share the road with safe.”

“When adaptive cruise and the first generation of ADAS started coming out, it was hard to prove the ROI because how do you prove the ROI of something that didn’t happen?” Bob said. “Now, fleets have looked at their year-over-year accident rate. And today, it’s more of a question of: ‘How can you afford to not spec it?’”

Hino’s L Series has also been infused with features to keep drivers productive as well as safe. The Hino L6 and Hino L7 models boasted bolder front fascia with optional LED headlights. The cab interior has been re-engineered with an automotive-grade finish designed for commercial use and improved functionality, Bob noted, as well as steering wheel controls, a large 7-in. LCD multi-information display, more storage and legroom.

Don’t call it a comeback: Cabovers have been here for years

“The cabover segment is one that everybody seems to overlook and think is consistently declining, but it has grown pretty steadily over the last few years and really strongly this past year,” said Bob Petz, Hino Trucks’ senior vice president for vehicle and parts sales, who noted that the Class 4 and 5 cab-over market is up close to 20% this year. Of this 25,000-30,000 truck market Hino makes up roughly 30% in class 5 after entering the segment only six years ago.

For model year 2021, Hino cab-over-engine (COE) models that make up its M Series, the M4 and M5, have been upgraded with an all-new grille design with optional LED headlights and HD six-speed Aisin automatic transmission with gear hold feature. The interior upgrades include a new shifter layout, steering wheel controls, and a gauge cluster that sports a 4.2-in. LCD multi-information display and driver’s seatbelt sensor.

“Regional and large LTL companies have bought cabovers in the last three years that I would’ve never thought would buy cabovers,” Bob said. “A COE is easy to drive, as easy as our Class 6 and 7 conventional product, but driver training is easier and you don’t need a CDL to drive any of our COE models as you do in the case of some of our conventional models.”