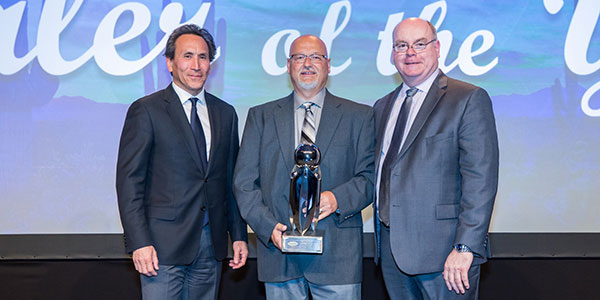 Carrier Transicold recognized the 2018 performance by its North America and Latin America dealers, reflected in a record 149 awards presented.

RETO, based in Guadalajara, Mexico, is now a three-time Dealer of the Year winner, all within a span of 10 years. In 2018, the dealership broke previous sales records set for the region, according to Jesús Estrada, region director for Mexico and Latin America for Carrier Transicold.

The annual dealer meeting, held this year in Scottsdale, Arizona, was attended by Carrier Transicold employees and representatives from 183 dealerships in the United States, Canada, Mexico, the Dominican Republic, Guatemala, Honduras, Costa Rica, Panama, Colombia and Chile, with guests from Carrier Transicold operations in Brazil.