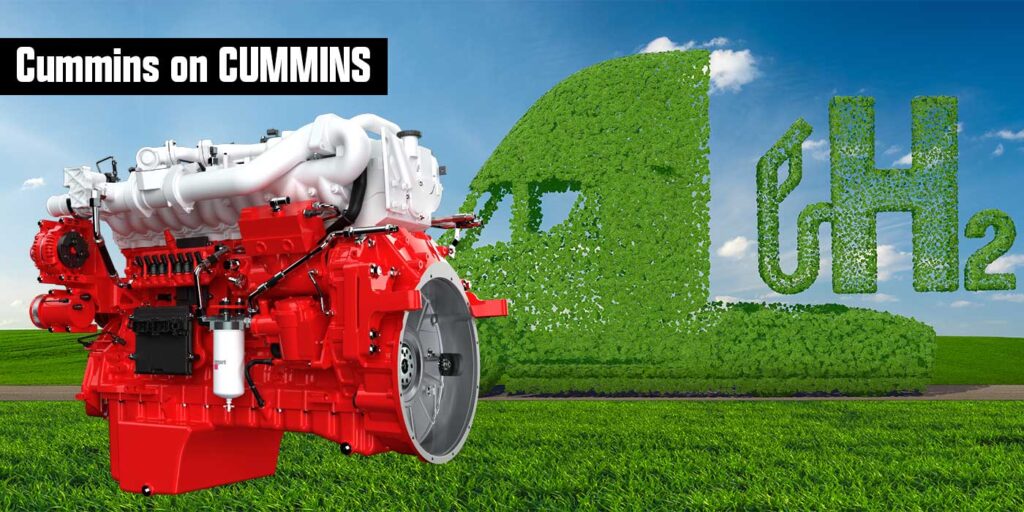 We have an answer to what comes first: The powertrain technology or the infrastructure that fuels (or charges) it? Electric trucks have rolled out in short-haul applications, and electric charging infrastructure has rolled out to support them. OEMs and fleets are driving the EV change in the battery electric arena, and that’s likely to be true in the hydrogen arena as well.

Hydrogen is currently in the same precarious place that battery electric trucks were about three years ago. Development of hydrogen powertrains are being developed behind closed doors and there’s growing interest from fleet customers. It’s early days in the adoption cycle–a cycle that Cummins aims to accelerate and shorten with its X15H hydrogen internal combustion engine, a 15-liter hydrogen power plant that is one of the most eyebrow-raising additions to Cummins fuel-agnostic X-Series portfolio.

Remember, we’re not talking about a fuel cell powertrain. This is an engine that shares plenty of commonalities with the well-known Cummins X15 diesel engine. Here are some quick-fire bullet points that outline the X15H similarities to its diesel counterpart:

• Power ratings that overlap (at least in part) with the diesel X15; and

• Common components for the engine block, crank and mounting points (to name a few).

“It’s very familiar,” Nebergall confirmed. “Maintenance practices are very common. There are not a lot of changes from the X15 to the X15H. We work in a risk-averse market. We have a risk-averse industry. The X15H doesn’t carry a lot of risk. Cummins can make an engine that runs on any fuel. Hydrogen just happens to be a great zero-carbon fuel that a lot of customers are moving to as their final fuel.”

“Final fuel”–that has a nice ring to it, but Nebergall knows that there’s a long hydrogen road ahead. The first mile marker on that road is finding the right application that will drive adoption. Cummins pegs long-haul routes at 300 miles or more as a prime target. Clearly that fills a decarbonization need with battery electric trucks capping out at about 250 miles of range, but there’s another potential solution for that application. Natural gas is an obvious (and growing) contender to challenge diesel in the short term, but still produces emissions (that can be offset if you fuel with renewable natural gas, but that’s another story). Of course, a hydrogen engine also produces NOx emissions.

“But it will be much lower than the emissions produced by today’s diesels,” Nebergall said. “About 75% lower. Very low NOx, but there will still be NOx.”

Nebergall was tight-lipped on specific emissions numbers and how it might stack up to the natural gas-driven X15N, but promised that more details would be shared once the engine is closer to launch.

The benefit of a hydrogen engine comes in the transition to a new fuel. While fleets would feel comfortable with the X15H similarities to the diesel X15, some of the X15H differences would help ease them into a hydrogen-driven future. Take the fuel storage system, for example.

“The on-board cylinder tanks for the X15H hydrogen fuel systems are exactly the same as for a fuel cell vehicle,” Nebergall said. “That’s good for the OEM because now they have the engineering work to figure out. This way they can integrate it once for the engine and it works with a fuel cell.”

Think of it as one small step toward decarbonization, from an equipment point of view, and one giant leap forward for the adoption of a new-to-long-haul-transportation fuel source. Yet it begs the question: Does the hydrogen engine stick around after the hydrogen fuel cell finds its footing in the market?

Nebergall gazed into his crystal ball:

“We don’t know what the future holds, but there are a lot of environmental conditions that we’ve designed engines to work in–extreme cold ambient temperatures or extreme operating environments where there’s a lot of dust and debris. For fuel cells, we need to see how they perform when it’s minus 40 degrees outside and water is coming out of the tailpipe. With an engine, you don’t have to worry about that. There are differences. I don’t know that one solution is ever going to be 100%. I think there’s a place for both in the future.”

In the short term, there are a growing number of options for fleets to tackle their sustainability goals. Click below to read more stories from our Cummins on Cummins series and dive into how they’re divvying up their engine development strategy:

The power density of diesel (and its decarbonization impact)

Natural gas engines in the Now: Potentially poised for growth