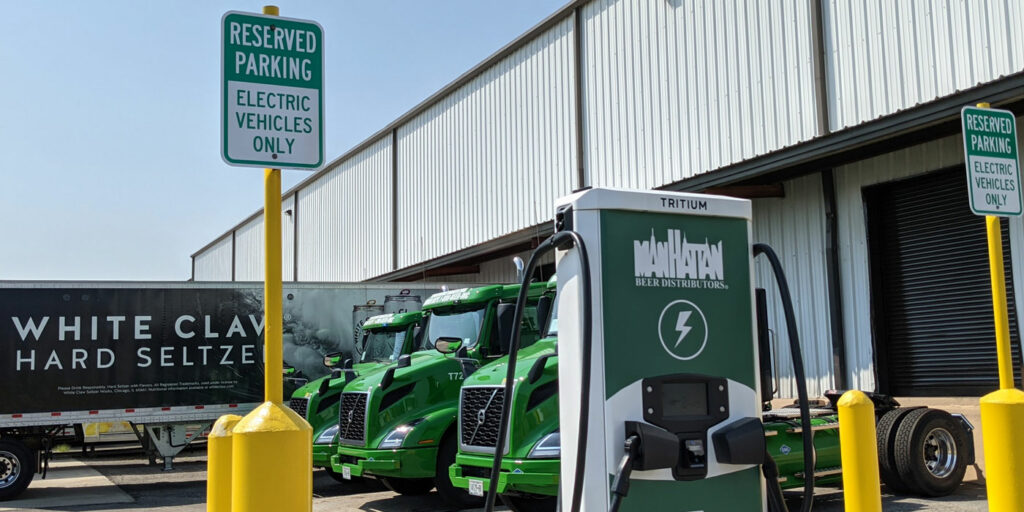 If you’ve ever been in New York City and purchased a beer from a bar, restaurant or similar establishment, there is a sizable chance that it got there by way of Manhattan Beer Distributors. The New York fleet services all of metro New York City with its 400 trucks, delivering 45 million cases of beer a year.

The fleet has a longstanding commitment to lowering emissions, having added compressed natural gas (CNG) trucks all the way back in 2001. Today, Manhattan Beer Distributors (MBD) is about 50% natural gas according to Juan Corcino, the fleet’s senior director of fleet operations and sustainability.

Recently, they added another sustainable fuel source to the mix, taking delivery of the first of five Volvo VNR Electric trucks on August 12. At a press event the day of delivery, fleet executives answered a series of questions on how they plan to use the trucks, what they’ve learned so far and their commitment to sustainability. Simon Bergson, MBD’s president and CEO, says that the ultimate goal is to replace all diesel trucks in the fleet with either CNG or electric within four years.

Why focus on sustainability?

“It’s definitely not for profit,” Bergson begins. “We were approached years ago, when a report came out that the south Bronx had a lot of asthma and the air quality was terrible. Congressman Jose Serrano and his office approached us and asked if we’d be willing to do something to minimize the fumes and the diesel fumes. He proposed this program, and there was a little bit of federal subsidy at the time. We took 15 diesel trucks that we retrofitted with John Deere CNG engines. We did it, honestly, only because I thought it was the right thing to do.

“From a marketing perspective, if there were a customer out there and they had the option, and Manhattan Beer’s delivering on a clean energy vehicle versus the other guy that’s delivering on a diesel, maybe the customer would take that selection. There was a thought process that I could market in a certain way, but it is the right thing to do for our planet and for the future, and for the community.”

Since the introduction of CNG, the fleet now uses 1.35 million fewer gallons of diesel per year than it did previously.

What kind of routes will the trucks be running?

Stop-and-go New York traffic with shorter routes is actually an advantage for these types of trucks thanks to regenerative braking. For example, a 15-mile delivery route through the Upper East Side of Manhattan can, according to Bergson, take “anywhere from six to nine hours.” These are the sorts of routes the truck will tackle at first, but in testing, the fleet found that even its longest New York route (60 miles round-trip) can be handled by the electric truck twice over—so two full days out of a single charge.

“What we’ve learned is by retrofitting these vehicles with air conditioning and backup cameras and all the safety features, the drivers in the area are realizing that even though it might be a little bit more physical work in the beer industry, it is a much nicer, quieter, safer vehicle. We are able to get some drivers to come through from other industries,” Bergson shares.

How is maintenance impacted?

When it comes to maintenance, a diesel truck is the most labor-intensive, Corcino says. “You have a lot of maintenance, many parts and sensor computers,” he elaborates. “By going to CNG, you eliminate about 40% of all these parts that can break down on the truck, and you reduce the maintenance and you have a more reliable vehicle. It’s more reliable in cold weather too; the diesel freezes but the natural gas doesn’t freeze in the winter.

“Transitioning to electric, you actually go deeper into a maintenance-free truck, where this truck doesn’t require an oil change, doesn’t get affected by cold weather. So we’re not only looking at an environmentally friendly truck, we’re looking at a much more efficient truck for our job.”

What kind of training was required for drivers?

“The first thing that we discussed before we placed the order of the electric truck was who will maintain this truck? What is the warranty on it? And when do I train my guys?” Corcino shares.

He notes that Volvo and Milea Truck Sales & Leasing, the fleet’s dealer, gave them a program in which the truck has six years of full maintenance included.

“We do not have to touch the truck,” he adds. “If there is any problem with the truck, Barry Milea will send his people on site, and [they are] committed to onsite maintenance for six years. Hopefully by then, we have a very clear vision of how to work on the truck, how to maintain it, and train mechanics.”

Previously in this series: Six electric truck questions with DHE