The fuel of the future? How hydrogen trucks could get their infrastructure 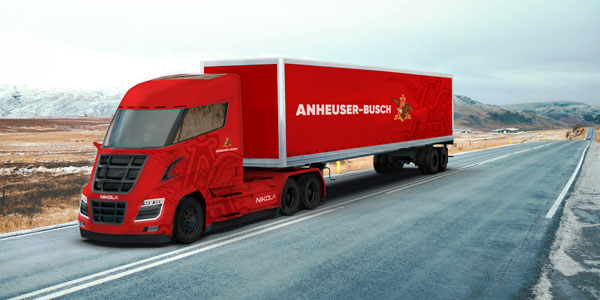 Many alternative energies are exciting to dream about, but you go crashing back to reality when confronted with one word: infrastructure. The “how” of putting together a network of charging stations for electric cars and trucks or hydrogen fueling stations is always much more difficult than the “how” of making those trucks available in the first place. Bosch and Nikola have been working on hydrogen truck solutions for some time now, and just as important as the work on the truck has been the ideas for hydrogen fueling infrastructure. And they have a few.

“A lot of people have said of hydrogen that it’s ‘always the fuel of the future,’” says Jason Roycht, Bosch’s regional business unit leader for commercial vehicles and off-road. “And, yet, no one has been able to nail down the distribution of hydrogen. One thing that attracted us to Nikola is that we saw a potential solution for this sort of chicken-and-egg problem. If you think about the trucking market, think of Anheuser Busch and what they aim to do.”

Roycht is referring to Anheuser Busch’s recent announcement that it placed order 800 of Nikola’s hydrogen electric trucks. The company also said it plans to cut overall greenhouse gas emissions by 25% by 2025. According to Anheuser Busch’s press announcement, the carbon reductions gained from these 800 trucks will reduce the brewer’s carbon emissions from logistics by more than 18%, which is equivalent to taking more than 13,000 passenger vehicles off the road annually.

“They have 12 major breweries in the U.S.,” Roycht elaborates. “Every day they send their trucks on the same routes from breweries to their fixed distribution points. So their trucks are driving the same routes every single day. When you take a company like Anheuser Busch that has repeating routes and goals to be 100% renewable, you have a really good fit to make an order of trucks, use that to establish the stations and then have the ability to make hydrogen at a reasonable cost level that can provide you with a total cost of ownership benefit. Nikola’s approach is to use electrolysis from renewable electricity sources and use this distributing model.”

Roycht goes on to acknowledge that one limiting factor for widespread use of hydrogen power is the need to manufacture and transport that hydrogen, and the costs associated with doing so.

“But,” he contends, “if you look at the U.S. transportation network, from a commercial vehicle standpoint, we don’t need to think about a hydrogen solution on every single street corner. We can use these major highway exchanges and address needs with companies that use repeating routes. We can build this network up step by step. This could be the first step in the introduction of a hydrogen network.”

As for the Nikola trucks themselves, Bosch and Nikola have been working together on the aptly named One and Two Class 8 hydrogen electric trucks, with the two companies jointly developing a two-motor eAxle solution and the fuel cell. According to Nikola, the truck will deliver more than 1,000 HP and 2,000 ft./lbs. of torque, all with “zero local emissions.”

“Our engineers love this truck, because it’s rare to be able to work on a truck from scratch,” Roycht says. “We have the opportunity to draw everything up like it should be from the beginning. That includes all of the controllers, that includes electrical architecture, that means making this truck prepared for everything that will happen in the next ten years—with redundant electronics, with redundant actuation, with connectivity and a safe and secure network running it all.”

Roycht says that Bosch and Nikola are planning to unveil the trucks “within the next couple of months,” and Nikola’s previously announced goal is to have the trucks on the market by 2021.