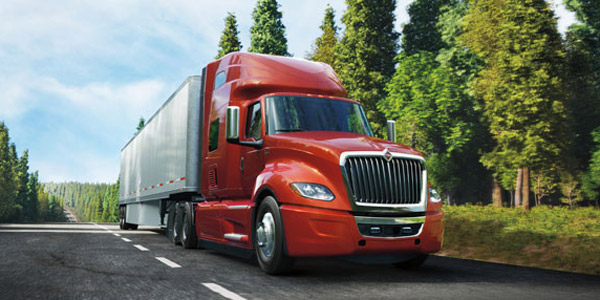 Upgrading from the earlier generation of Fusion as standard equipment on the International LT Series and RH Series, the company says the enhanced Fusion system delivers:

The enhanced Wingman Fusion system now has the capacity to apply increased braking power on the tractor and trailer when compared to the original Fusion system. It also retains the capabilities of the system’s earlier versions, such as stationary object alerts, overspeed alerts and intervention, lane departure warning and prioritized alerts to help reduce driver distraction.

International has also added the updated optional Bendix BlindSpotter Side Object Detection System features for the LT Series and RH Series. The company says it has enhanced the optional Blindspotter system through improved integration with the vehicle’s controller area network. With this new integration, the updated BlindSpotter system provides a wider, 150-degree range of coverage, which is capable of detecting objects up to 20 ft. in front of and 20 ft. behind the BlindSpotter radar. The coverage zone extends up to 10 ft. to the right of the vehicle.

By operating in two modes – highway speeds and lower speeds – the updated Blindspotter system has an increased ability to filter stationary objects like guardrails at highway speeds, and narrows the range for alerts without filtering stationary objects or infrastructure at speeds less than 20 MPH, the company says. The updated BlindSpotter system maintains the look, size, position and mounting hardware of its radar and in-cab display units.

International says it is at this time the only OEM to offer Bendix Wingman Fusion with ACB Stop and Driver Go, optional for the LT and RS Series. This system includes the benefits of Wingman Fusion with enhanced features, and ACB Stop and Driver Go which allows for Adaptive Cruise Control to remain active down to low vehicle speeds, including full stop. Once at stop, if the driver applies throttle and reaches 7 MPH, the system can re-accelerate the vehicle to the cruise control set speed, provided there is no object detected ahead.

Another optional system being offered on the LT and RH Series is Lane Keep Assist, which supports the driver with assisted steering torque to remain within the lane of travel when a pending unintended lane departure is recognized. The system’s active steering functionality dynamically adjusts steering effort based on vehicle speed, allowing lighter steering at low speeds to aid in maneuvering in parking lot situations, and heaver/firmer steering at higher speed to aid in control of the vehicle, the company says. The system – built on an existing Sheppard steering gear that is already standard on many Navistar vehicles – also includes compensation to counter cross winds or road crowning, steering wheel return-to-center assist, and active damping to reduce steering wheel oscillations and improve feel, the company adds. R.H. Sheppard Co. Inc. was acquired by Bendix in June 2020.