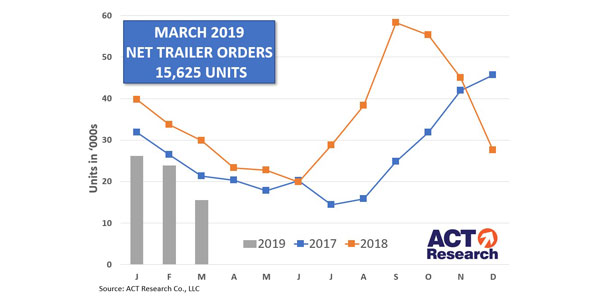 According to the latest reports from both ACT Research and FTR, trailer orders continued to fall in the month of March.

According to the latest reports from both ACT Research and FTR, trailer orders continued to fall in the month of March.

FTR‘s numbers had preliminary trailer orders for March 2019 at 13,500 units, the smallest monthly total since September 2016 and the lowest March since 2008. Trailers orders for the past 12 months now total 371,000 units.

“This low order number is not surprising,” said Don Ake, FTR’s vice president of commercial vehicles. “Backlogs had fallen little so far in 2019, and are at unreasonable levels. Fleets still need more trailers, based on the robust production, so demand has not changed in the short run. The weak orders are totally the result of the lack of available production openings. However, cancellations will continue to be a factor due to a large, fluid, backlog.”

“Factory inventory was a mixed bag across categories, but most unusual was reefers, up 60% year-over-year and at the highest level in our historical database, which started in 1990,” said Frank Maly, director of CV transportation analysis and research at ACT Research.

The ACT report also noted that cancellations have averaged more than 2,300 per month for the last four months, the longest string of higher volume months since the mid-year 2016 market inflection.