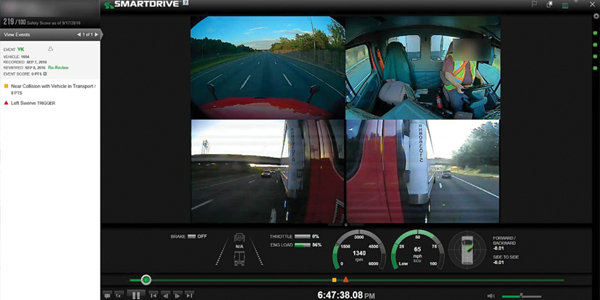 Driver-facing cameras are generally part of a larger video telematics system, which is made up of a series of cameras and sensors that monitor driver and truck behavior and set alerts to the fleet manager if certain parameters are exceeded or violated. These parameters are typically customizable and are set by the fleet—for instance, a hard braking event, or exceeding the speed limit by a certain number of MPH.

So why spec driver-facing cameras? Most suppliers name the ability to exonerate a fleet in court after an accident, and avoid exorbitant litigation fees, as by far the number one benefit of the camera systems.

“Commercial fleet drivers are often assigned blame when involved in an accident, due to the commonplace assumption that the larger vehicle is at fault,” said Jason Palmer, chief operating officer for SmartDrive. SmartDrive offers an eponymous camera-based program that runs off of a series of sensors in the truck which assess how the vehicle and driver are performing. “With video, fleet managers know within minutes what transpired leading to a collision and can quickly exonerate a driver who is not at fault. This allows the company to avoid a costly and time-consuming claim process that typically becomes a ‘he-said-she-said’ situation. The indisputable certainty of video footage ensures that drivers avoid an unjust citation that could lead to their commercial driver’s license being revoked.”

Palmer also acknowledged that if the company driver is at fault, video can at least accelerate the claim resolution process.

So that’s the main benefit from an ROI perspective. The second benefit—though one that’s harder to measure—is the ability to coach driver behavior and help drivers rid themselves of bad habits.

“In-cab video presents an opportunity to show drivers doing the right thing, including videos of incidents avoided and accidents prevented,” said Drew Schimelpfenig of the Omnitracs Safety Center of Excellence.

Omnitracs’s video solution is known as Critical Event Video (CEV), and supports in-cab, outward and optional inward-facing cameras. “These videos can be used to acknowledge and reward the driver of that vehicle. They can also be shared with entire fleet to reinforce the principles of safety trained by your fleet. These safety principles include: proper following distance, effective lane usage, constant situational awareness and vigilance and appropriate speed for conditions including road type, grade, cornering, lane changing, traffic, weather and visibility.”

According to Palmer, a recent SmartDrive survey found that drivers distracted by mobile devices are 88% more likely to be involved in a near-collision and 87% more likely to exceed the speed limit by at least 10 MPH. Distracted drivers also are less fuel efficient, averaging 6.1% lower MPG than all other drivers.

“In-cab video provides fleet managers visibility to this distracted driving, enabling them to intervene before a collision occurs,” Palmer said. “Within the first year, fleets that implement video-based solutions see a 59% reduction in driver distraction, due to the accountability and behavior awareness video brings to the fleet. Additional performance benefits amassed through in-cab video include a 74% reduction in fatigue; a 69% reduction in speeding; and a 75% reduction in close following.”

Kristin Costas, director of product management at Lytx, singled out following distance as the most prevalent coachable behavior picked up by Lytx’s cameras as part of the company’s DriveCam in-cab video program. Costas also notes that fleets are often exposed to some eye-opening realities: “When a fleet first deploys with us, it’s interesting, because they think that because they have a policy on cell phones and seat belts that that’s not happening in their fleet,” she said, her tone of voice conveying the fact that, yeah, these things are happening in every fleet.

For an in-depth look at the pros and cons of driver-facing cameras, read our story here.