As of Aug. 1, 2011, the first phase of the Federal Motor Vehicle Safety Standard (FMVSS) 121 reduced stopping distance regulation requires a loaded Class 8 tandem axle tractor with 59,600 GVWR or less to stop in 250 ft. from 60 mph, down 30% from a previous standard of 355 ft. Phase two, which goes into effect in August 2013, mandates shorter stopping distances for 6×4 severe service tractors and all 4×2 power units. 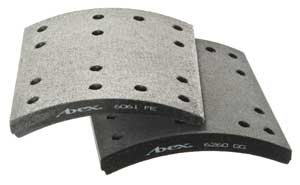 The first phase of the new stopping distance regulations covers approximately 70% of all new tractors built after Aug. 1 of last year. Air disc brakes, a technology previously considered mainly for bus, coach, fire truck and other special applications, have been experiencing continued growth in popularity on North American commercial vehicles used in on-highway operations. Fleets are increasingly interested in air disc brakes for safety performance and their potential for reduced maintenance requirements.

There is ample evidence that air disc brakes can meet or exceed new stopping distance regulations. However, suppliers are still hard at work addressing an ongoing challenge. In particular, the concern has to do with ensuring proper balance when tractors are equipped with disc brakes on steer axles and drum brakes on drives, a fairly common specification, or when an air disc brake-equipped tractor is hooked to a trailer with a drum brake system, or vice versa. 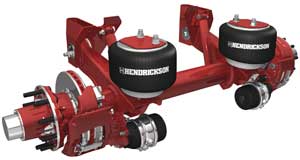 Valid concerns
“Air disc brakes are excellent products. They are becoming more available, and are now standard on some vehicles,” says Jim Clark, director of engineering at TMD Friction North America, a manufacturer of brake friction materials for OE and aftermarket use on commercial vehicles. “While there is a lot more interest among fleets, there also are valid concerns.

“The issue is incompatibility when disc brakes tend to keep working and drum brakes fade, generating less braking power,” Clark explains further. “In certain conditions, this can prematurely wear out the disc pad, or even initiate rotor cracking. Two design factors contribute to this. First, a drum brake uses lining blocks primarily made from high temperature resins, whereas a disc brake typically uses metallic-based linings. The metallic pad can operate at higher temperatures better than the drum lining.

WABCO
The PAN Range of air disc brakes from WABCO is designed for trailer applications. Maxxus air disc brakes from the manufacturer are offered for on-highway tractors and trucks. Both systems feature a single-piston design for easy axle adaptation in a variety of applications, and a monobloc caliper and reinforced single-piston clamping unit. Available is a Continuous Wear Sensor (CWS) that measures the wear of both pads and the disc continuously.
www.wabco-auto.com

“Secondly,” Clark continues, “there is a mechanical difference in the way drum and disc brakes react to increased temperature. When the brake drum heats up, its surface actually moves away from the lining as the drum expands. Conversely, when the disc heats up, it moves closer to the pads.

More compatible
Manufacturers agree that the air system should generally not be adjusted to correct for this phenomenon, Clark states, and that crack pressures should remain the same. Instead, the answer could partly be found in the disc brake pad’s friction material, in a pad that is designed to fade so its high temperature performance is more compatible to a drum brake’s lining.

TMD, Clark reports, is working with brake system manufacturers and vehicle OEMs to focus on building fade into disc brake pads. “The most important thing we’re finding,” he says, “is that properly formulated air disc brake pads may help address a basic incompatibility between disc and drum brakes caused by differences in their structures and lining materials.”

Federal-Mogul Corp., a global OEM friction manufacturer and supplier of friction products for the replacement market, is also working to address concerns about balance between air disc and drum brake systems on tractor-trailer combinations.

Stable characteristics
“Manufacturers need to design in the most consistent and stable friction characteristics to make sure the torque outputs are similar in profile between air disc and drum brake in tractor/trailer combinations,” says Greg Vyletel, commercial vehicle friction engineer.

“The key is to balance friction stability and torque outputs between the front and rear,” Vyletel continues. “It’s a delicate balance to make sure you have the right combination so the front is not doing all the work, and vice versa.”

Another concern, TMD’s Clark notes, is the lack of an aftermarket brake lining performance standard. “If a new air disc-equipped tractor is hooked to a drum-braked trailer with poor performing linings,” he says, “the risk of incompatibility can be increased.”

Today’s air disc brakes are dramatically improved over earlier versions, when service replacement availability and cost issues limited acceptance. Regulations mandating shorter stopping distances for commercial vehicles may hasten their acceptance. For that reason and others, fleets are more strongly considering their benefits and electing to specify air disc brakes on new vehicles. 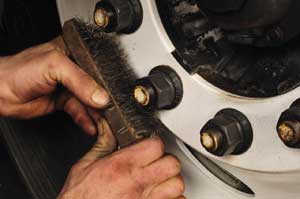 • Hub-Piloted Wheel Nut Installation
The information listed in this technical tip refers to M22 X 1.5 wheel nuts with flange. Hub-piloted wheels do not use inner cap nuts. TMC RP 222B, “User’s Guide to Wheels and Rims” and TMC RP237, “Retorquing Guidelines for Disc Wheels” provide important information to follow when re-assembling the wheel. 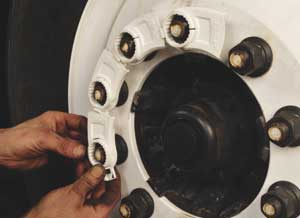 • Maintaining Proper Clamp Load on Hub-Piloted Wheel Ends
Clamp load is defined as the amount of force created by the wheel stud and nut. With a M22 X 1.5 stud and nut on a 10-hole system, there is approximately 50,000 lbs. of force when properly torqued to 500 ft.-lbs. The resulting force causes the wheel, drum and hub to compress while the wheel stud threads stretch. The combination of these two actions is called preload. When loads created by the operating vehicle exceed preload, the grip length will shorten and the joint will loosen and fail.

SKF recommends careful inspection of the condition of components whenever a vehicle is in the shop, looking for rust, dirt, corrosion or paint. Cleaning debris from the joint area will help improve safety and reduce costs. Following these helpful hints and carefully following all applicable procedures will go a long way toward improving safety and optimizing wheel end life.

Advertisement
In this article:Before & After, Brakes

The skinny on air disc brakes